The objectives are to characterize the coastal hazards of sea-level rise, storm surge, and wave energy alongshore the Swinomish Reservation and the resulting vulnerability of habitats for first foods and culturally significant sites; and develop opportunities and planning tools to build adaptive capacity using a sustainable systems-based approach that can be disseminated using a multipronged education approach.

For Year 1, the project has two objectives: (1) develop an integrated model characterizing the variability in projected coastal hazards of inundation and erosion due to the combined influence of sea-level rise, storm surge and wave energy through the year 2100 alongshore of the Swinomish community; and (2) map the vulnerability of Swinomish first foods, coastal ecosystem habitats of first foods, and culturally significant sites in relation to the cumulative influences of climate change (sea level rise and storm surge) and shoreline development. These Objectives are underway and on target to be completed in a timely manner. In Year 1, the QAPP was approved November 18, 2014. All sub-awards and data sharing agreements were approved by March 2015. Data collection began in April 2015 during the first daytime low tides of the year and will continue through the winter storm season. We are in the process of calibrating data collection methods for use in the Delft3D model and have begun characterizing the baseline/current geomorphic and biologic conditions for our six focus areas (Figures 1 and 2). The Juvenile Clam Recruitment and sediment traps were deployed on two Reservation beaches in April 2015 and are scheduled for the first of three rounds of sampling in mid-June 2015. Initial stages of model development are complete. We plan to continue to integrate the data collected during Summer 2015 and the coming winter into the model as a calibration to further refine outputs. 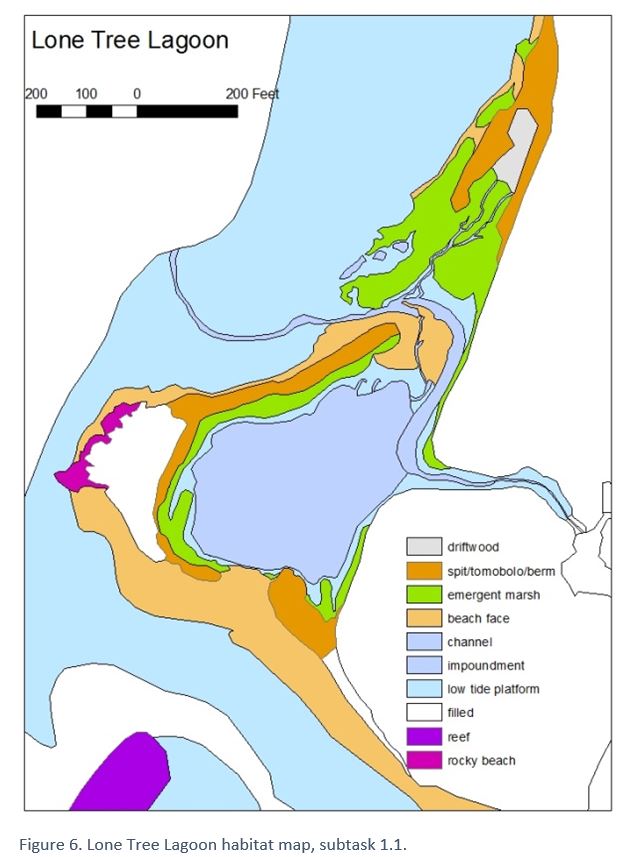 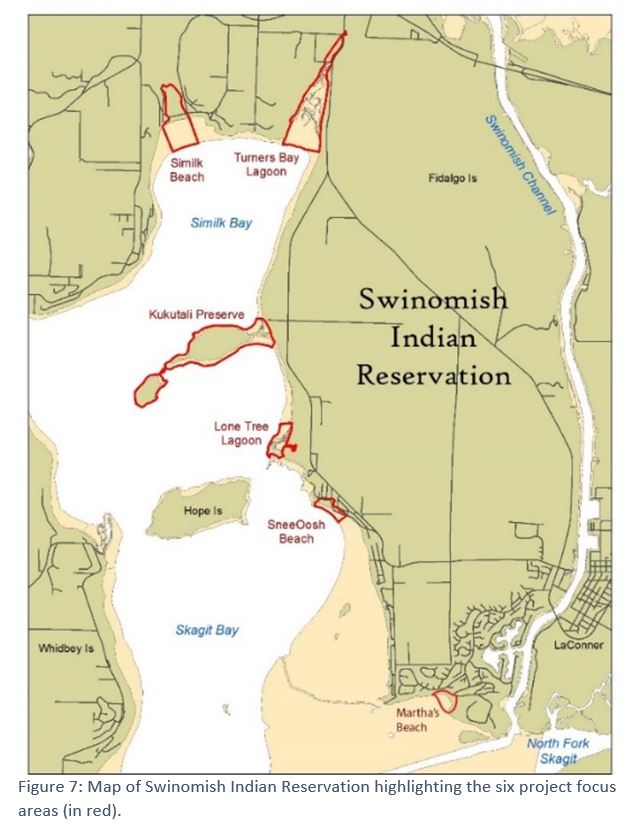 Planned activities for Year 2: Continuation of data collection for the physical science tasks will continue through the Winter of 2015/2016 except for the Juvenile Clam Recruitment, which will continue through August 2016 (Year 3). The analysis of data collected will continue as new information is collected. A critical task for Year 2 will be the synthesis of all the habitat and climate change modeling results into presentation materials for the Community Health workshops outlined in Objective 3.

The Community Advisory Board will meet quarterly and will oversee design and testing of the materials for the Community Health Workshops. Workshops will be begin in the fall of 2015 and continue through the summer of 2016 (Task 4). Analysis of the workshop data will occur as the data are collected (Task 5). Objective 4 (create assessment and strategy matrices based on outputs of Objectives 1–3 as adaptation/mitigation planning tools in Swinomish Climate Change Initiative) and Objective 5 (Employ a multipronged education and dissemination approach to ensure that tools (models) results and associated meanings for Tribes are widely disseminated locally, regionally in Coast Salish communities, and beyond) will start in the fourth quarter of Year 2 (March 2016).

No journal articles submitted with this report: View all 42 publications for this project