Historically, both spark-ignited and diesel engines control piston temperature by basic, passive cooling system design considerations. This is done to avoid engine damage and cooking of the oil. Electro-Mechanical Associates has developed active piston temperature control (APTC) to achieve similar benefits, but with additional gains. This Phase I program has demonstrated significant emission benefits as well as possibly a small fuel economy gain using APTC without apparent damage to the piston or oil. APTC has received a provisional patent.
For the study, a production Dodge-Cummins 5.9 liter, 24 valve, I-6 diesel engine of contemporary design was modified for single cylinder operation. Cylinder 2 was used and its exhaust and air supply were isolated. The APTC system was installed. Piston temperature, engine out NOx, HC and particulates, exhaust temperature and blowby, as well as fuel consumption, were measured under selected operating conditions including starting, idle and light-to-medium load. Tests were run with and without the APTC system in place.
Engine test results showed that APTC significantly shortened the time for the engine to warm up to a stable condition. The time for particulates to drop significantly was reduced by approximately 40 percent. Exhaust temperature rose more rapidly. During warm-up under idle load conditions, particulates dropped 75 percent and HC dropped 40 percent.

Several engine tests were run with and without APTC at selected speeds and loads, both warming-up and stabilized. At steady state, warm idle, it was found that a significant reduction in soot particulates of 60 to 80 percent accompanied APTC use. HC dropped approximately 15 percent. At higher speeds and loads, soot and HC changed somewhat, but the dramatic differences were during starting and warm-up.
With APTC, NOx emissions always increased slightly. During starting and warm-up, NOx levels were extremely low, and any increase was insignificant.
A very small improvement in fuel economy of 2 percent or 3 percent was noted in some tests, but it was within the uncertainties of the measurements and not definitive.
The graph shows an example where APTC dramatically reduced particulate emissions. It took approximately 100 seconds to produce a 50 percent change in soot particulates when the APTC system was activated. 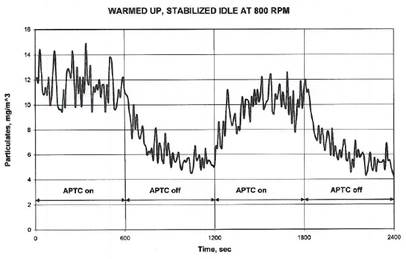 This Phase I study showed that there is a clear emission incentive for APTC, especially during engine warm-up and idle. It is possible that emission benefits will arise during transient operation as well, but this was not explored. Should the benefit be of commercial interest, the cost for implementation is moderate and implementation effort minimal.