This is an interdisciplinary study to investigate the implications of climate change for spring-run Chinook salmon and terrestrial ecosystems adjacent to spawning grounds, based on modeled changes in water temperature and flow conditions. Chinook salmon are a keystone species that link aquatic and terrestrial ecosystems and support directly or indirectly many ecosystem services in California watersheds. Annual runs of Pacific salmon historically transferred large quantities of marine-derived nutrients into the California interior through the decay of salmon carcasses, supporting forests, terrestrial animals, and other aquatic species. The geographic focus of the study is Butte Creek, which was selected because of its critical role in plans for the protection of threatened spring-run Chinook populations and the apparent vulnerability of the system to climate change. This vulnerability stems from the fact that the low elevation headwater regions of Butte Creek, and the West Branch Feather River from which water is transferred into the Butte Creek watershed, could potentially limit snow accumulation and melt, which are important for the maintenance of suitable water temperature conditions for salmon. The complex set of non-linear interactions between habitat and ecosystems is being represented by coupling models of physical and biological processes. The integrated watershed hydrology, water management, and water quality model, WEAP (Water Evaluation and Planning System), is being applied to address: a) rainfall-runoff watershed processes; b) water supply, use, withdrawal, return flows, outflows, and reservoir operations; and c) water quality, most notably water temperature in streams and reservoirs, which will be a critical determinant of the presence of the cold water conditions required by salmonids. WEAP outputs of water temperature and streamflow are passed to the SALMOD model, which simulates the population dynamics of anadromous and resident freshwater salmonid populations under variable ecological conditions. SALMOD results related to salmonid survival in Butte Creek under a range of future climate scenarios will provide information to an expert panel that will assess the plausible implications of these results for terrestrial ecosystem services in the communities adjacent to spring-run spawning grounds. Using model runs that assume alternative water management arrangements, the expert panel also will comment on the potential utility of strategies designed to better manage cold water resources and to increase the resilience of the ecosystem in the face of climate change.

To take advantage of and extract additional value from ongoing reconnaissance visits to Butte Creek, we added two additional project elements to quantify the Butte Creek salmon nutrient footprint (salmon-based food web). In 2007, 2008, and 2009, motion detector scouting cameras were installed to document the identity and activities of salmon consumers. In 2008, stable isotope analysis was performed on plant and animal tissues to document the relative proportion of marine-derived nutrients supplied to the system by salmon. Sampling for isotopes was expanded to include additional sites and biota in 2009. Results from these analyses will be used to refine and validate the conceptual salmon-based food web model and to document the relative contribution of marine-derived nutrients supplied by spring-run salmon to the productivity of the system. In June 2010, we presented our preliminary results to an expert panel: WEAP and SALMOD results related to salmonid survival in Butte Creek under a range of future climate scenarios, as well as information from food web and isotope analysis. The expert panel was asked to assess the plausible implications of these results for terrestrial ecosystem services in the communities adjacent to spring-run spawning grounds. Using model runs that assume alternative water management arrangements, the expert panel also was asked to comment on the potential utility of strategies designed to better manage cold water resources and to increase the resilience of the ecosystem in the face of climate change. In August 2010, we presented the WEAP and SALMOD results at a stakeholder workshop with participants from resource agencies, hydropower utilities, and local environmental groups. We are using feedback from the two workshops, plus several presentations of our work at scientific meetings, to make further refinements to the models and to expand the suite of management options we are evaluating.

Our research objectives are formulated as a set of questions, first for the aquatic and then for the terrestrial systems:

For the aquatic system:

For the terrestrial system:

The focus of our work during the third year of this project was on completing the final calibrations of the WEAP and SALMOD models to historical data, running the WEAP model using climate data from six downscaled General Circulation Models for two greenhouse gas emissions scenarios, and running the SALMOD model to predict the effects of climate change on spring-run Chinook salmon in Butte Creek.  Furthermore, we engaged in testing the effects of several water management adaptations to see whether they could mitigate the negative effects of climate change on the fish.

Our objective was to determine streamflow and temperature regimes that would lead to long-term reductions in spring-run Chinook salmon in a California stream and evaluate management adaptations to ameliorate these impacts. We used bias-corrected and spatially downscaled climate data from six General Circulation Models and two emission scenarios for the period 2010–2099, to run two linked models, and generated a range of future outcomes. WEAP predicted that summer base flowswere lower, and water temperatures were higher for both climate scenarios vs. historical conditions (Figures 1 and 2). SALMOD predicted increased summer thermalmortality of adult salmon; the population was predicted to decline for all climate scenarios and model combinations (Figure 3). We tested three management adaptations: (1) cease diversion of water for power production, (2) store cold reservoir water upstream for release during hot weather, and (3) a combination of adaptations 1 and 2. Adaptations 1 and 3 resulted in cooler temperatures (Figure 4), more adults surviving to spawn, and extended population survival time (Figure 5). 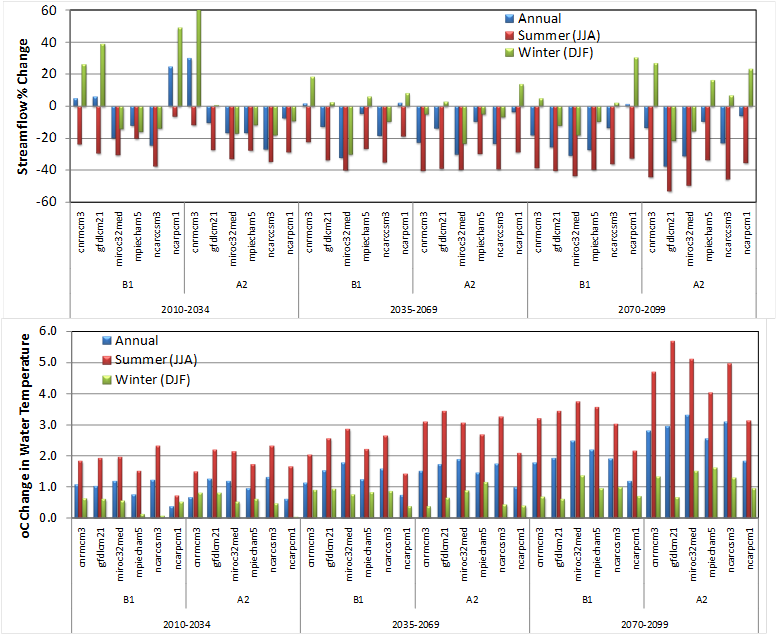 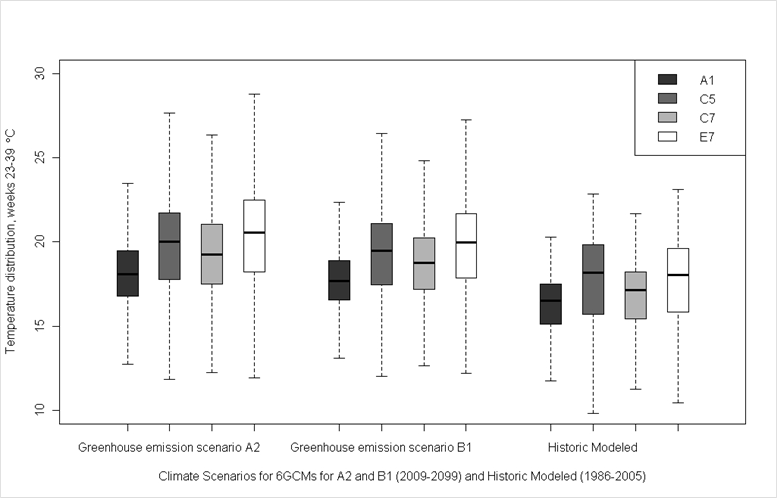 Figure 3. Water temperatures predicted for six General Circulation Models under A2 and B1 greenhouse gas emission scenarios (distribution of all General Circulation Models for 2009-2099 are graphed together for each scenario and pool) and historical modeled (1986-2005) weekly average temperature distribution for weeks 24-39 for pools A1, C5, C7, and E7. 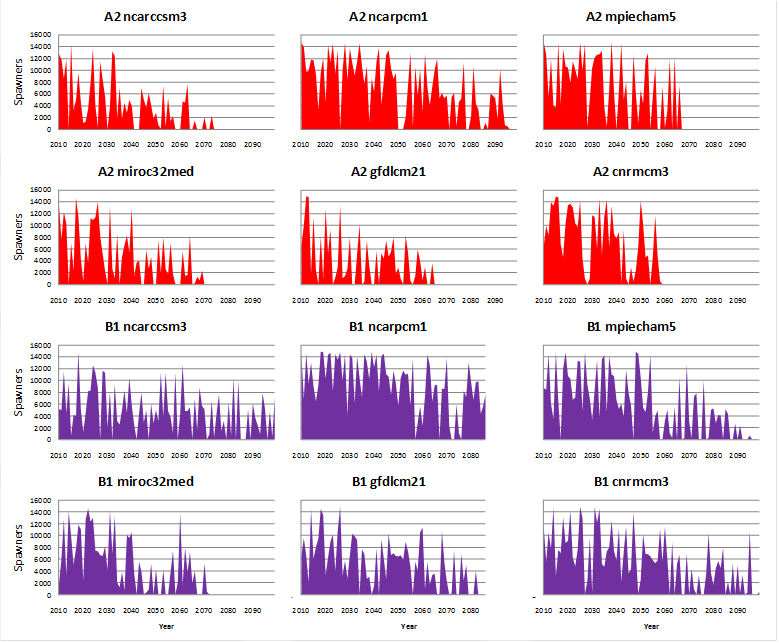 Figure 4. Annual spawner survival predicted for six General Circulation Models under A2 (red) and B1 (purple) greenhouse gas emission scenarios for 2010-2099.
Salmon were assumed to be extirpated when there were four consecutive years with no adult summer survival. 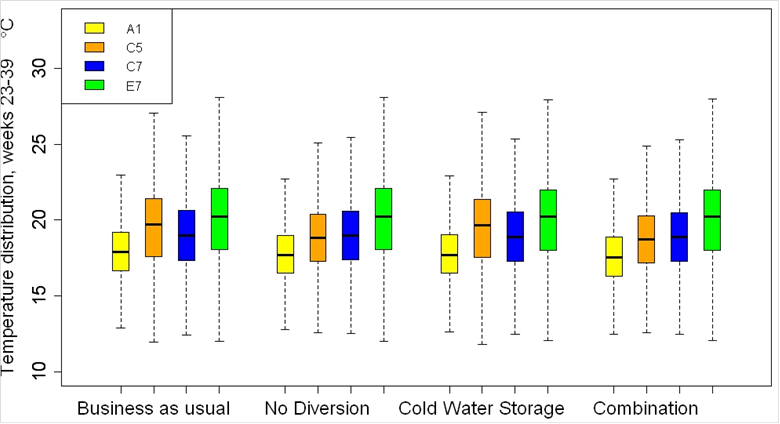 Figure 5. Water temperatures predicted for six General Circulation Models under A2 and B1 greenhouse gas emission scenarios and three management adaptations.
The data for the 12 model and climate scenario combinations for 2009-2099 are graphed together for each pool A1, C5, C7, and E7. Y-axes show weekly average temperature distribution for weeks 24-39. 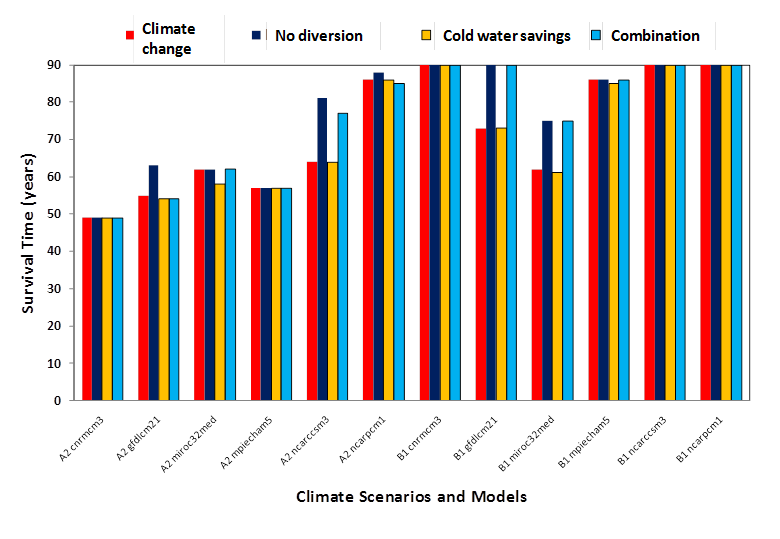 Figure 6. Survival time of spring-run Chinook salmon in Butte Creek predicted by SALMOD for six General Circulation Models and A2 and B1 emission scenarios, for the baseline climate change case, and three management adaptations.

The most important conclusion of this work is that the long-term viability of SRCS in Butte Creek is questionable in the face of climate change and that simple and indiscriminately defined adaptations are not likely to dramatically change vulnerability to extinction. Specifically, the analysis reveals that it is plausible to expect that the system will tip past critical thresholds some time during the second half of the 21st century, even when a set of optimistic biases are introduced in the analytical framework. For the managers of SRCS in Butte Creek, and in the wider Central Valley, this conclusion poses significant challenges that require an ecosystem service protection strategy that moves well beyond efforts to protect these fish by invoking incremental changes in current system management regimes. It is likely that Butte Creek SRCS is not the only resource facing such a challenge.