The overarching goal of our study is to understand the fundamentals that govern the risks related to aquatic exposure of water-dispersed carbon nanotubes. Our research planned research tasks include:

In the past year, we have tested the phase distribution of 14C-labeled multiwalled carbon nanotubes (MWCNTs) between water and four typical soil components as model solid phases: kaolinite and smectite as two clay particles, peat and shale as two types of soil organic matter (SOM) under different NaCl concentrations (0, 0.4, 4, and 40 mM). In particular, we examined the effect of pH on the phase distribution of MWCNTs in the presence or absence of kaolinite or smectite (Figure 1). The results showed that when pH decreased from 8 to 4, the amount of MWCNTs removed from the liquid phase increased. This coincides with our earlier results that the solublized MWCNTs with negatively charged surface have decreased stability when lower pH decreases the surface potential. When compared to a system free of a model solid phase (controls in Figure 1), kaolinite sorbed MWCNTs more significantly at pH 4, while smectite sorbed MWCNTs more significantly at pH 8.

(b)
FIGURE 1. The phase distribution of MWCNTs under different pHs in the absence or presence of a solid phase: a) kaolinite; b) smectite.

Shale, an aged SOM, is intermediate between clay mineral and peat SOM. It appears to strongly sorb MWCNTs, even with low concentration of sodium under which the MWCNTs suspension is very stable in other tested systems. We compared the sorption by shale with two doses of shale in the system, 50 g/L and 10 g/L, under different NaCl concentrations (Figure 2).

FIGURE 2. The comparison of the phase distribution patterns between treatment containing shale with the dose of 50 mg and 10 mg.

We have used an extended DLVO (EDLVO) theory, which considers the acid-base interaction along with the electrostatic force and van der Waals force, to analyze the mechanisms governing the interaction between MWCNTs and the solid phases. The phase distribution of MWCNTs can be captured pretty well by the EDLVO theory, especially for the clay minerals kaolinite and smectite. This indicates that the major interaction forces between inorganic clay particles and MWCNTs can be well summarized by the three forces mentioned above. However, the pattern of shale, the organic clay particle, differed from those of the other two inorganic clay particles, for which additional forces, such as hydrogen bonding or chemical bonding, need to be included to accurately reflect the complex interactions occurring.

Possible environmental transformation of carbon nanotubes is critical for their life-cycle environmental risk assessment but this has not yet been fully investigated. Carbon nanotubes are considered to be very inert to reactions due to their aromatic nature that is similar to polycyclic aromatic hycrocarbons (PAHs). Previous studies have shown that white rot basidiomycete fungi (Phlebia tremellosa and Trametes versicolor) can degrade fullerol (the derivative of fullerene) into CO2 and incorporated minor amounts of the fullerol carbon into lipid biomass. Single-walled carbon nanotube (SWNT) also can be degraded by horseradish peroxidase (HRP) into shorter SWNTs, CO2, and simple aromatic compounds as intermediate products. MWNT is considered to be less reactive than these two carbon nanomaterials and their biodegradability has not been reported.

In this study, we found an enrichment culture that is capable of mineralizing 14C-labeled MWNTs into 14CO2 (Figure 3). This culture lacks fungi species demonstrated by 16s rDNA PCR amplification with general fungi primer pair; instead, multiple bacteria strains were detected. Cloning isolation followed by DNA sequencing revealed three possible degraders, Burkholderia kururiensis, Delftia acidovorans, and Stenotrophomonas maltophilia (Figure 2). In addition, incubation of MWCNTs as the only carbon source showed neither microbial activity nor 14CO2 production, indicating an additional carbon source is necessary in the biotransformation of MWCNTs. Further research is required to identify the degrader and to investigate the transformation pathway.

Bioaccumulation and Trophic Transfer of MWCNTs

During the past year we have concluded exposures with Ceriodaphnia dubia showing reproductive and potential maternal transfers of MWCNTs and have expanded our investigations to two additional taxa, the fathead minnow and the mysid shrimp (see below). We are making final edits on a manuscript entitled “Reproductive effects and bioaccumulation of multi-walled carbon nanotubes in Ceriodaphnia dubia: effects of solubilization techniques” to be submitted to Environmental Toxicology and Chemistry in December 2011.

In the past year we began studies of the semi-chronic toxicity of CNTs in the fathead minnow (Pimephales promelas). The fathead minnow is found throughout the United States and is a standard organism used in EPA whole effluent toxicity (WET) tests as well as for other regulatory biomonitoring. Experiments measured bioaccumulation in larval fathead minnows (48 h post-hatch) fed brine shrimp exposed to 14C-labelled CNTs. Fish were exposed for 7 days to three concentrations (along with a control) in triplicate, with 48 hour static renewals. Nanotube solutions were prepared as in our previous research (bath-sonicated) and exposure concentrations determined with a range-finder test. Fish were removed at day 7 and growth parameters (length and dry weights) were measured, followed by digestion and measurement of 14C activity. We identified strong uptake by P. promelas with a nanotube concentration of 20 mg/L (Figure 5).

Chronic studies will resume in January 2012 to quantify trophic transfer in additional life stages (juveniles and adults) of fathead minnows in a series of 28-day exposures. Fish will be fed living prey items exposed to 14C-labeled nanotubes and fish chow fortified with unlabeled and labeled nanotubes. We are waiting on synthesis of additional 14C nanotubes to complete this task and anticipate completing these studies with the fathead minnow in fall 2012.

Bioaccumulation and Reproductive Effects of CNT Exposure to the Mysid Shrimp

Building on our results of reproductive toxicity observed in C. dubia, our group was able to leverage funding in 2011 from the Georgia Oceans and Human Health Initiative (Emily Roberts was awarded 1 year salary support, travel and experimental materials) to design and conduct experiments with 14C-labeled CNTs on a marine organism at the NOAA Coastal Center for Environmental Health and Biomolecular Research in Charleston, SC. In collaboration with NOAA scientists we conducted partial life-cycle tests with the mysid shrimp (Americamysis bahia), a keystone organism in the marine food web, monitoring bioaccumulation and reproductive effects of exposure to 14C-CNTs. There are no data on toxicity of MWCNTs to marine invertebrates; however, exposures of the marine copepod, Amphiascus tenuiremis, to SWCNTs caused mortality, reductions in fertilization rates and reduced molting, effects similar to our observations in C. dubia. We monitored survival, reproductive effects and bioaccumulation at three important lifestage windows, 0-7 days (the youngest and likely most vulnerable stage for toxicant effects); 7-14 days (when sexual maturity occurs); and 14-21 days (when the first reproduction occurs). Surprisingly, we observed more toxic effects in the 7-14 day window than in younger or older lifestages. In exposures to this intermediate lifestage, 43% of mysid shrimp exposed to 1 mg/L failed to become sexually mature compared to controls. Seven to 14-day old mysid shrimp also accumulated more CNTs by weight than individuals in the younger and older lifestage windows. Survival was not affected in any group exposed to CNTs. Our results are the first to demonstrate reproductive toxicity of MWCNTs on a marine invertebrate. This research was recently presented at the annual SETAC meeting in November 2011 and the manuscript for this research is in progress, to be completed in Spring 2012.

Maternal Transfer of CNTs in the Fathead Minnow

In January 2012, we will begin exposures of fathead minnow eggs to 14C-labeled CNTS to evaluate their effects on hatchability and survival of young. We also will begin long-term exposures of reproductively mature fathead minnows to 14C-CNTs to assess maternal transfer of CNTs in the fish model. Previously, we observed accumulation of 14C-CNTs in C. dubia neonates following maternal exposure to 14C-CNTs; however, because C. dubia have live births, we could not isolate neonates from maternal exposure water to exclude the possibility of uptake vs. maternal transfer of the CNTs. The fathead minnow reproduces via eggs, allowing for maternal and egg/neonatal exposures to be separated, facilitating measurement of maternal transfer. A second graduate student has been tasked with these experiments and we anticipate completing these experiments in 2012.

[The following information was submitted in the project report dated June 17, 2011]

In our previous study we have identified an unknown bacteria consortium that can mineralize MWCNTs. In the past year, we have focused on identifying the degrader(s) by using plate isolation and genetic tools. We were able to pinpoint tentatively that Stenotrophomonas maltophilia is the species that is responsible for MWCNTs degradation. Figure 6 shows the mineralization of MWCNTs by Stenotrophomonas maltophilia under different conditions. All treatment started with the same initial condition: a no-carbon-source media (inorganic nutrients), glucose, MWCNTs and bacteria. "Continuous incubation" means nothing was added during the incubation period. "Add no-C media" and "add glucose" means additional no-carbon-source media or glucose was added every week. "Control" is the treatment without bacteria growing ensured by adding NaN3 as bactericide. These results showed that the best degrading efficiency occurred when the inorganic nutrients were supplemented continuously. On the other hand, with extra glucose supplemented, the degrading efficiency was lowered, suggesting that although the mineralization requires external carbon source, excess carbon will impair the ability of Stenotrophomonas maltophilia to degrade MWCNTs. 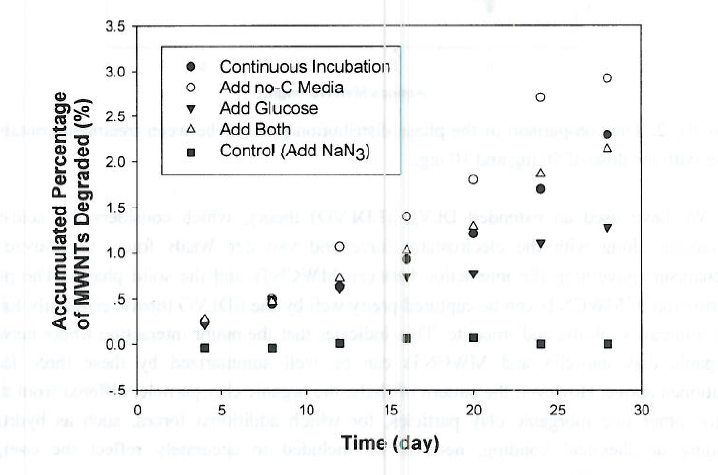 Earlier studies have focused mostly on using acute toxicity tests to assess the potential toxicity of CNTs to freshwater invertebrates and fish. However, little information is known on the toxicity of carbon nanomaterials following chronic exposures of aquatic organisms. Last year, we examined chronic effects of 14C-labeled MWCNTs on Ceriodaphnia dubia, an aquatic invertebrate, in 8-day exposures.