Photocatalytic processes are being used for environmental remediation and have shown promise for the production of clean-burning hydrogen fuel. The continued development of these technologies, particularly those which use solar energy for photoexcitation, will require new and improved photocatalysts. The objective of this project is to determine the relationships between the composition, structure, and photocatalytic properties of tunneled titanate materials. In studies of BaTi4O9 and M2Ti6O13 (M = Na, K and Rb), other researchers have suggested that structural features such as a distorted TiO6 octahedra and tunnel sites may be responsible for enhanced photocatalytic activity. By preparing and examining different tunneled materials with systematic variations in chemistry and structure, we will be able to further test the validity of this hypothesis and identify factors that influence photocatalytic activity.

The photocatalytic activity of the titanates towards decomposition of a model compound, methylene blue, was evaluated using optical spectroscopy and compared to Degussa P25, a commercial titanium-oxide photocatalyst. Approximately 0.1 gram of the sample powers was placed in 125 mls of a 20 μM methylene blue solution and irradiated with a 100 W xenon lamp for up to eight hours. At periodic intervals, a small portion of the solution was removed and analyzed using optical spectroscopy. Figure 1 shows that all of but one of titanates, Na0.7Ga4.7Ti0.3O8, show some degree of photocatalytic activity towards the methylene blue decomposition, but none were as effective as the commercial photocatalyst. However, it is important to note that the surface area of the photocatalyst was ~ 50 greater than any of the tunnel titanates produced in this study, which is expected to have a dramatic effect on activity. 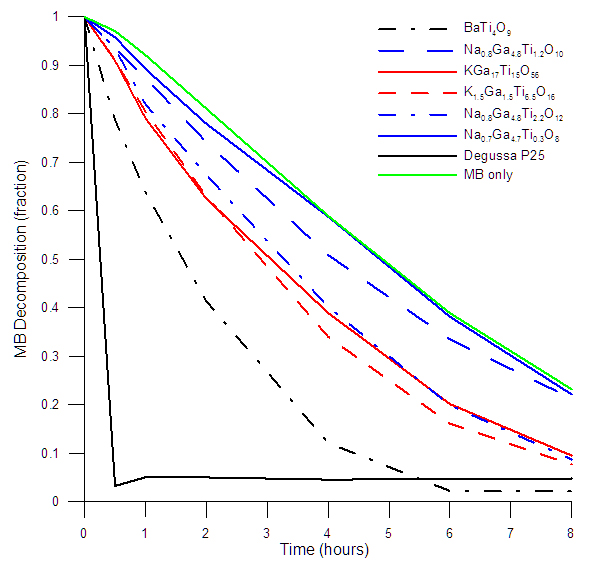 The photocatalytic activity towards hydrolysis is currently being studied.

No journal articles submitted with this report: View all 1 publications for this subproject