The genetic engineering of complex traits into crop plants will ultimately require strategies to co-express more than one protein at the same time. In this project, we developed a ubiquitin (Ub)-based expression method capable of generating multiple, separate proteins from a single transcript. The vector contains coding regions for the proteins of interest, separated in-frame by the coding region for the C-terminal end of Ub followed by a full-length Ub. Upon expression in plants, this polycistronic mRNA is translated to produce a chimeric protein that is rapidly processed by endogenous Ub-specific proteases (UBPs) to release the two proteins plus a Ub moiety in intact forms. Whereas the C-terminal protein is released without additional amino acids (aa), the N-terminal protein domain retains the short C-terminal end of the Ub sequence. Analysis of this vector system in yeast, tobacco, and Arabidopsis indicates that multiple proteins can be released by this method from a single large transcript. Quantitation of the products from a l uciferease (LUC)-Ub-β-glucuronidase (GUS) fusion indicates that stoichiometric accumulation often occurs. Deletion analysis revealed that the Ub moiety appended to the N-terminal protein can be reduced in length to just six amino acids and still promote cleavage by UBPs in both yeast and tobacco. From this work, it appears that Ub-based polyprotein vectors can provide a simple method for the coordinated and stoichiometric synthesis of two or more proteins in plants.

The genetic engineering of crop plants has enormous potential to increase agricultural production while simultaneously minimizing chemical inputs and environmental impact. Possibilities include the development of plants with enhanced nutritional value and biomass ; greater resistance to herbicides, insects, and pathogens; or the ability to economically synthesize pharmaceuticals, vaccines, industrial proteins, and polymers. Current approaches typically involve the manipulation of simple traits that require only one transgenic protein. However, as more complex traits are attempted, methods to allow the introduction of multiple proteins will be needed. Examples include the use of plants to co-express the two subunits of antibodies, generate plants with both herbicide and insect resistance, or to introduce the entire enzymatic pathways needed to synthesize vitamin A or biodegradable plastics.

Current methods for introducing multiple proteins involve either transforming multiple genes simultaneously or using repeated rounds of transformation to individually introduce each gene. With both methods, achieving and maintaining balanced expression for each protein is a challenge given the genetic independence of the introduced loci. A more subtle complication can also arise in subsequent generations if the genes unpredictably vary their expression levels independent of the other gene(s). Transgene silencing, which can effectively suppress gene activity, may further complicate expression if the same promoter is used multiple times to drive transcription (Baulcombe, 1996). These problems are best illustrated by the time -consuming procedures needed to engineer Arabidopsis to produce polyhydroxybutyrate (PHB) plastics, tobacco to make antibodies, and rice seeds to synthesize Vitamin A (Hiatt, et al., 1989; During, et al., 1990; Poirier, et al., 1992; Poirier, et al., 1995; Ye, et al., 2000). Ultimately, the movement of multiple transgenes into elite cultivars will require expanded genotypic analyses that grow exponentially as the number of proteins needed to confer a particular trait(s) increases.

Obviously, new strategies are needed for expressing more than one transgenic protein in plants. One approach is the simultaneous expression of multiple proteins from a single gene. Here, the coding region for each protein is attached in-frame in a tandem array and expressed as a polyprotein, which is then proteolytically processed to release the individual polypeptides. Its advantages include the elimination of genetic independence and the ability to generate coordinated and equimolar expression through the use of one common promoter. The potential of this approach was first demonstrated by co-expressing two proteins separated by the NIa protease-recognition sequence from tobacco etch virus (TEV) along with the NI a protease (Marcos and Beachy, 1994, 1997; Bodman, et al., 1995; Dasgupta, et al., 1998). Halpin, et al. (1999) more recently reported the use of 2A sequences within mammalian aphtho- and cardioviruses as a way to release two polypeptides from a single transcript. Although first thought to work via self proteolytic cleavage, new studies indicate that 2A sequences promote ribosome skipping to create multiple products. That the proximal polypeptide is produced in far excess of the distal polypeptide precludes its use for stoichiometric expression.

Another more promising approach is to use Ub -based genes to simultaneously express two or more proteins. Their potential is derived from the fact that Ubs are naturally synthesized as protein fusions, either as poly-Ubs or as Ubs attached to the N-terminus of unrelated proteins (Callis, et al., 1995). Following translation, the fusions are rapidly and accurately processed in vivo by ubiquitin-specific proteases (or UBPs) to release Ubs and the attached proteins in functional forms (Figure 1). UBPs are Ub-specific and will remove almost any polypeptide appended to their C-termini, the exception being extensions bearing proline as the first residue (Varshavsky, 1992; Yang, et al., 1999). In fact, by exploiting UBPs, a variety of proteins have been expressed transgenically as Ub fusions, including those with N-terminal residues other than methionine (Butt, et al., 1989; Ecker, et al., 1989; Hondred, et al., 1999). 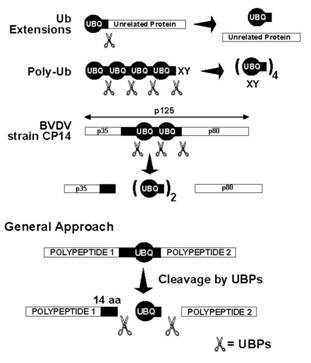 With regard to expressing multiple proteins, Varshavksy and coworkers first tested the Ub-based approach in yeast using two proteins separated in frame by a single Ub moiety. While two proteins could be simultaneously expressed, it was unclear if the proximal protein retained the Ub moiety (Levy, et al., 1996; Suzuki and Varshavsky, 1999). In the completed project, we refined this strategy based on the molecular organization of several pathogenic biotypes of b ovine v iral d iarrhea v irus (BVDV). These biotypes contain a novel genetic arrangement whereby host sequence encoding poly-Ub became inserted within the viral gene encoding the nonstructural protein p125 (Meyers et al., 1991). In the BVDV strain CP14 for example, the p125 gene is interrupted by the C-terminal 14 amino acids of Ub followed by two complete Ub repeats (Figure 1). The Ub sequences were proteolytically removed from the p125 protein by three cleavage events to generate two intact ubiquitin monomers, the C-terminal half of p125 (p80), and the N-terminal half of p125 (p35) containing the 14 C-terminal aa of Ub (Tautz, et al., 1993). The success of the first cleavage suggested that the 14 C-terminal aa are sufficient for recognition by UBPs.

The overall goal of our work was to test this Ub-based approach in plants using the BVDV genomic organization as a frame work and create a general-use vector for its exploitation (Figure 1). As will be seen below, this strategy appears to be a useful method for the simultaneous and stoichiometric production of multiple proteins in plants.