There has been no change in the specific aims of this study, they are to study the role of Phase II enzymes in regulating responses to pollutants in: children's upper airways (Aim #1); the lower airways of healthy and asthmatic individuals (Aim #2) and in mechanistic animal and cellular models of allergic inflammation (Aim #3).

As of November 1, 2007, Dr. Diaz-Sanchez will no longer be the principal investigator of this project as he has taken a position with the US EPA. In Year 10, this project will continue under the leadership of Dr. Marc Riedl, a close collaborator of Dr. Diaz-Sanchez’ for the past five years.  Dr. Riedl is an Assistant Professor of Medicine at the UCLA David Geffen School of Medicine and is Section Head of Clinical Immunology and Allergy.

Aim #1: We will test the hypothesis that Phase II enzyme expression in the upper airways are induced by oxidant pollutants and differ between children and adults.

Last year we reported that children appear to be more vulnerable to the adverse effects of oxidant pollutants. Children demonstrated an increased cellular inflammatory response to diesel exhaust particles (DEP). This appeared to be associated with their decreased capacity to produce an adequate Phase II enzyme response to DEP challenge. These results support the concept that the potential of an individual to mount a Phase II antioxidant defense may regulate the development of acute and chronic airway inflammation. This year, we have built on these results to test whether in vitro Phase II enzyme expression can predict in vivo inflammatory responses to DEP. We recruited 20 allergic but otherwise healthy volunteers and obtained blood. We purified peripheral blood mononuclear cells (PBMNCs) from the subjects and stimulated the cells with 10 µg/mL of DEP in 1mL plates. After incubation for 24 hours, glutathione-S-tranferase (GST) activity was measured by following the conjugation of 1mM 1-chloro-2,4,dinitrochlorobenzene (CDNB) with 1mM GSH in 200mM sodium phosphate buffer as measured at 340nm using a spectrophotometer over time. Enzyme activity was expressed as millimoles of CDNB conjugated per minute per milligram of cytosolic protein. The subjects were then challenged intranasally with 300µg of DEP with nasal lavages performed prior and 24 hours after challenge. As seen in the figure below, in vitro GST activity predicted in vivo inflammatory responses. The population could be divided into two populations: the first with a GST activity above 100 which had low or minimal inflammatory responses following DEP challenge. In this population (n=8) cell influx into the nose was limited and production of pro-inflammatory cytokines (GM-CSF, IL-1beta) and chemokines (RANTES, IL-8) was not statistically different after DEP challenges vs. baseline levels. The second population (n=12 had a GST activity under 60 and was characterized by a significant or very robust second inflammatory response following DEP challenge. In this population there was a statistically significant increase in pro-inflammatory cytokines and chemokines after challenge. In addition, GST activity in this population was inversely proportional to cell numbers or RANTES production. 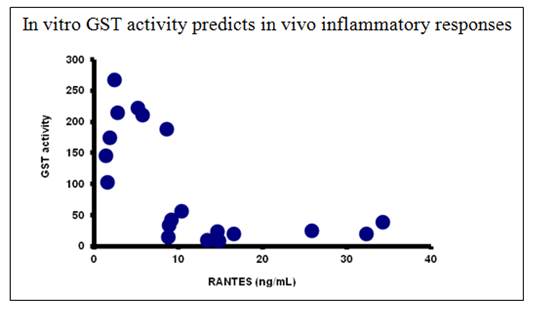 Determining GST activity from blood cells may be a useful test to determine susceptibility to pollutants. Currently, the only test available is by performing in vivo challenge.
Aim #2: We will test the hypothesis that Phase II enzyme expression in the lower airways are induced by oxidant pollutants and differ between asthmatic and non-asthmatic subjects. In the past year we have exposed an additional 10 subjects (5 asthmatic and 5 non-asthmatic) to diesel exhaust to study the effect of Phase II expression on lower airway responses. To date we have thus performed exposures on 15 healthy and 20 asthmatic subjects. We have observed that expression of our four sentinel Phase II enzymes (GSTM1, GSTP1, HO-1 and NQO1) is significantly elevated in both healthy and asthmatic subjects following exposure to 2 hours of diesel exhaust (100 µg/m3). No such induction is observed following exposure to either filtered air or nitrogen dioxide. Phase II enzyme expression was measured in cells recovered from induced sputum performed 24 h after exposure. IL-8 levels in this sputum of subjects was significantly inversely correlated with Phase II expression. Thus the higher the levels of GSTP1 the lower the levels of IL-8.
Aim #3: We will determine the role of Phase II enzymes in regulating the adjuvant effects of particulate pollutants. We have previously reported that individuals who lack the ability to make the Phase II enzyme GSTM1 are at increased risk for the pro-inflammatory effects of DEP. Furthermore we have shown that enhancement of Phase II enzymes with sulforaphane can inhibit the production of pro-inflammatory cytokines in respiratory epithelial cells in vitro. In order to determine whether GSTM1 itself is important in the regulation of inflammatory response to pollutants, we used siRNA to "knockdown" the GSTM1 gene in bronchial epithelial cells. Expression could be reduced by more than 90% using this methodology. Knockdown of GSTM1 augmented DEP induced cytokine production in these cells. Thus IL-8 levels were almost 3 fold higher in cells where GSTM1 expression was reduced, compared to sham treated cells.
The principal finding of this last year is the close correlation between the capacity of an individual to produce Phase II enzymes and their airway inflammatory response to challenge with DEP. This supports the view that children are more susceptible to high levels of pollutants due to a diminished ability to form this protective antioxidant response. The discovery that in vitro GST expression is associated with in vivo inflammatory responses, provides the potential to develop a diagnostic test for susceptibility to oxidant pollutants.

In the next year, we intend to continue recruitment of adults and children for Aims #1 and #2 and further develop an in vitro test to predict airway susceptibility to pollutants.