The overall goal of this project was to configure, validate, and employ cost-effective real time instruments to measure water-soluble components of urban aerosols to support source apportionment efforts and human health studies. The project investigated techniques capable of measure the following species at a time resolution faster than one hour:

To achieve these goals, the project involved two research institutions with project monetary resources split nearly evenly between them. The University of Wisconsin developed the analytical methods and the Georgia Institute of Technology integrated these methods into field-deployable instruments. The project proposed two main analytical methods: Ion Selective Micro-Electrodes (ISEs) and UV-VIS Spectrophotometry with Long-Path Adsorption Cells. These analytical methods were to be integrated with a Particle-Into-Liquid-Sampler (PILS) to produce an online and automated particle composition monitor.

The overall project accomplishments are:

Details are provided below.

Common Inorganic Ions: Commercially available and newly developed methods were tested for measurement of the target analytes/species identified in the proposal. Table 1 summarizes the project research results. Based on laboratory calibrations and sensitivity studies the methods were assesses as being acceptable for typically-loaded 12-24 hr filter collection or shorter term (1 hr) on-line PILS analysis. Table 1 also indicates if the analytical methods were tested with ambient filter extracts or integrated with the PILS.

The analytical characteristics for a number of commercially available microelectrode sensors were assessed. All were low cost and relatively straightforward in concept and implementation. Ion Selective Electrodes (ISEs) were acquired for measurements of ammonium, calcium, potassium, sodium, and chloride. Potassium and sodium ESIs were the only ones identified with sufficient sensitivity for chemical analysis of typical ambient aerosol filter extracts; ammonium, calcium and chloride were deemed only useful for high concentration atmospheres. However, because liquid concentrations for the online PILS system are lower then integrated filter extracts, due to short integration times, only potassium was found to likely be acceptable for PILS integration (results discussed below), with ammonium, calcium and sodium measurements possible in high concentration atmospheres.

Particular attention was paid to measurements of nitrate and sulfate due to high ambient PM2.5 aerosol concentrations. For nitrate, two other methods were investigated: a UV-Spectrophotometric method (UV-Optical) and a flow-through ion-selective BioSensor (Bio-Nitrate). Only the UV-Optical method was found to be promising, however, issues with interferences from other analytes must be accounted for, complicating the method (Lange, et al., 2009). No method was found for measurement of sulfate. A barium sulfate precipitation- ligand exchange method was evaluated, but the method proved unreliable.

Overall, our studies find that the current state of ISE technology makes them marginally useful for online aerosol samplers due to limitations with sensitivity. Continued development of these sensors may make future application to aerosol science more viable.

Soluble Metals: As part of early studies by the project PIs, UV-Vis methods based on ferrozine light absorbing complexes had been developed for measurements of PM2.5 water-soluble Fe(II). Thus method development for WS_Fe(II) was not part of this project, however, it was a major thrust in the development and testing of an online instrument, discussed below.

Analytical approaches were investigated for quantifying other trace metals, adding to a suite of metals that could be detected (see Table 2). Detection of water-soluble copper in ambient particles was tested using a Spectrophotometric method that involved bathocuproine chemistry (BDH-Cu) and a micro flow-through Ion Selective Electrode (ISE-Cu). Comparison between ICP-MS and the spectrophotometric method confirm the method (linear regression slope of 1.007, r2=0.98). A unique aspect of the BDH-Cu method was the ability to distinguish Cu oxidation states. This oxidation state information may be useful as a source tracer and the ratios as a redox probe and proxy for aerosol properties, such as age or transport history/conditions/processing. As shown in Table 2, Copper (i.e., Cu(I)), Manganese (i.e., Mn(II)) and Iron (i.e., Fe(II)) methods based on a spectrophotometric method combined with a long (1 m) path-length liquid wave-guide capillary cell (LWCC) have been successfully tested and would work for quantifying typical PM2.5 ambient filter extracts. Given typical ambient concentrations the LWCC method was deemed to be not sufficiently sensitivity to measure Chromium (i.e., Cr(VI)). It was also found that apart from unusually high concentration atmospheres, only Iron was acceptable for application to an online instrument (PILS). Two publications currently in progress and led by the University of Wisconsin (Co-PIs J. Schauer and M. Shafer), will summarize the analytical development/testing of ionic and soluble metal sensors investigated in this project.

Online instrumentation for inorganic ion measurements using Ion Selective Electrodes. Despite the sensitivity limitations in applying ISEs to online measurements, a demonstration/validation of the method was done using a PILS coupled to a K+ ISE (Rastogi et al, 2008). The schematic of the system is shown in Fig. 1, and the approach is applicable to other ISEs. To test the response and operation of the system the PILS-K+ ISE was deployed for ambient measurements in a region of prescribed burning in southern GA (e.g. region of high and variable K+ concentrations). The response of the PILS-K+ ISE was found to be reasonable as the measured K+ tracked the temporal trend of other fire emissions; CO and particle number concentration (CPC). Although the data set was small, comparisons between the PILS-K+ ISE and filter-ion chromatography measurement of K+ were in good agreement (slope = 1.07, R2 = 0.75 for intercept forced through zero, and slope = 0.85, R2 = 0.86 for intercept = 0.52 µg m-3, n = 5). A PILS-Na+ ISE system was also recently (May/June 2010) deployed in southern California to also test the PILS-ISE approach. Results from that study are not available for this final report.

Online instrumentation for water-soluble metals using spectrophotometric with long path liquid waveguide capillary cell (LWCC): Due to the advanced development state of the Fe(II) detection method, much of the online instrument development/validation of the project focused on measurements of water-soluble Fe(II) in ambient PM2.5 particles. Figure 3 shows the schematic of the PILS-LWCC method for measuring water-soluble Fe(II) (denoted hereafter as WS_Fe(II) (Rastogi, et al., 2009). Extensive validation studies were carried out with this instrument in both Detroit Michigan and in Atlanta Georgia. For example, Figure 4 shows a comparison between PILS-LWCC and Filter-LWCC (i.e., same analytical method) measurements of WS_Fe(II). These studies not only provided validation of the method but the unique data was used to investigate sources of WS_Fe(II) and atmospheric processes that may influence concentrations. The key findings from this research were that although no clear diurnal trends in WS_Fe(II) were observed at any of the urban sites, high temporal variability was observed at all urban sites, where concentrations often changed from the LOD (5 ng m-3) to approximately 300 to 400 ng m-3 within a few hours, suggesting localized sources (e.g., see Figure 5). In Dearborn, MI, transient WS_Fe(II) events were observed when down wind of industrial sources located within 10 km to the south of the site. Emissions from this wind sector included a coal-fired power plant, cement kiln, large petroleum refinery, wastewater treatment plant, and two steel mills. The specific source could not be identified. In Atlanta, elevated WS_Fe(II) concentrations often were correlated with sulfate, with highest concentrations associated with a more apparently acidic aerosol, suggesting that the low pH aerosol generated in coal-fired power-plant plumes leads to a more labile form of iron (i.e., WS_Fe(II)) (Oakes, et al., 2010) (see Figure 6). At one Atlanta site, a WS_Fe(II) transient event was often observed in late evening that was not related to aerosol acidity, but the source was not identified. No correlation was ever observed between WS_Fe(II) and elemental carbon, indicating no direct relationship to mobile source emissions. Overall, measurements from the two urban sites indicate that WS_Fe(II) were possibly associated with direct industrial emissions or atmospheric processes that transform some fraction of the aerosol iron to WS_Fe(II). The method description and detailed results from the online data have been published or are in press (Rastogi et al, 2009; Oakes et al, 2010) and have been presented at a number of conferences (Oakes, et al., 2007; Oakes, 2008; Oakes, et al., 2008; Oakes, et al., 2010; Rastogi, et al., 2008; Weber, et al., 2008; Weber, et al., 2009). As the first online measurements of a soluble metal, these are unique data and results. 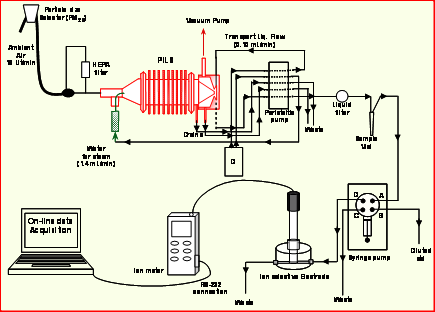 Figure 1: Schematic diagram of prototype PILS Ion-Selective Electrode System (e.g., in this case for the measurement of K+) 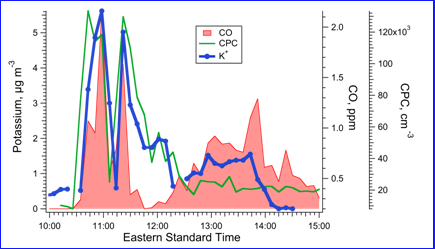 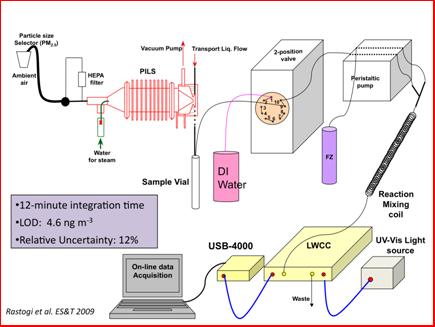 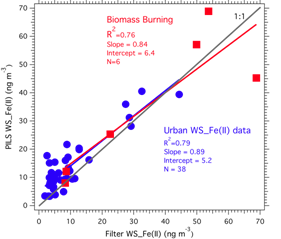 Figure 4: Comparison of the online PILS-LWCC measurement of PM2.5 water-soluble Fe(II) to particles collected with a Teflon filter over a period of 24 hours and that was extracted with water and analyzed with the same LWCC system.

Figure 5: Measurements of water-soluble Fe(II) (WS_Fe(II)), wind speed and precipitation made in Dearborn Michigan in January 2008.

Figure 6: Correlation between enhancements in DWS_Fe(II) (i.e., the increase in WS_Fe(II) within the plume relative to immediately outside the plume) with enhancements in DSO2 and Dsulfate, and aerosol acidity (anion/cation ratio). The results show that more apparently acidic plumes resulting from enhanced sulfur levels are associated with greater WS_Fe(II) concentrations.

The use of ion selective electrodes integrated with online liquid-based aerosol collection systems is likely not a viable alternative to current ion chromatography based systems due to lack of sensitivity for typical ambient atmospheres. This project demonstrated, however, through development of a prototype that these systems have the potential with future ISE technological improvements of providing a simple and robust system for network deployments.

A prototype instrument for online measurements of water-soluble metals was developed and deployed at multiple sites throughout a two-year period. It was demonstrated to be a robust and quantitative means for measuring water soluble Fe(II) in fine (PM2.5) ambient aerosols under a wide range of conditions. The instrument is suitable and available for future health studies. The ambient studies provided the first high temporal resolution (~12 minutes) data of water-soluble Fe(II) showing clear evidence for large transient events lasting a few hours and affording new insights on the sources of water-soluble Fe(II) and atmospheric processing that influences ambient concentrations.


Journal Articles on this Report : 4 Displayed | Download in RIS Format