AgNt84 was PCR amplified from the initial cDNA clone using forward 5’CAGCGGATCCCATTGTCTCCAATCCTCTTCA3’ and reverse primer 5’TGACGAGCTCAGACGTACGTACAACTGATAGCAT3’, which introduced BamHI and SacI sites, respectively. The BamHI-SacI fragment was then ligated into pBI121, in front of a CaMV35S promoter as shown in Figure 1. 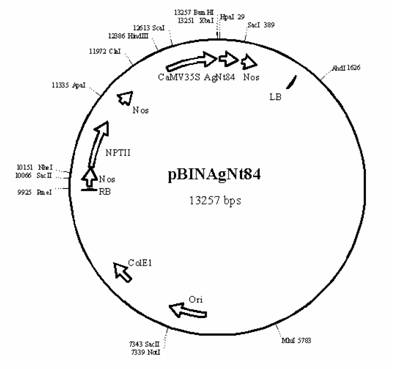 The gene was later transformed into Populus tree. We have obtained 80 kanamycin-resistant hybrid aspen plants (Figure 2). Leaves collected from about 2-month- old transgenic plants, grown in the culture room, were confirmed by PCR (Figure 3). Currently, 18 putatively transformed plants have been confirmed by PCR. An additional 60 -80 plants will be confirmed by PCR. Southern blots will be performed to determine the copy numbers. For the confirmed aspen lines, each line has approximately 2 -6 copies. We will multiply each line to about 10 plants for heavy metal test for phytoremediation.

Expression of AgNt84 was confirmed by northern blot (Figure 4). The protein, however, was in an unextractable form, tightly bound to the cell wall. Immunostaining of cell wall pellets showed a strong fluorescent signal from transgenic plants compared to controls (Figure 5). Overall, transgenic plants appeared normal, indicating that overexpression of a metallohistin gene did not interfere with normal plant cell metabolism.

Figure 5. Immunostaining of Pellets From Cell Wall Protein Extraction Show That AgNt84 is Still Tightly Bound Within the Cell Wall. Immunostaining was performed with rabbit preimmune and anti-AgNt84 immune serum, followed by incubation with FITC-linked Goat Anti-rabbit IgG as the secondary antibody.

Figure 6. Metal Binding in Transgenic Tobacco: Dithizone Staining of Tobacco Wild-Type (WT) and Transgenic Lines T12 and T17 Hydroponically Grown in the
Presence or Absence of 200 mM Cd (NO3)2. Arrows indicate staining resulting from the formation of Cd dithizonate. The color of dithizonate ranges from
an orange red to red-violet color in order of increasing Cd concentration in the tissue. Intense staining is observed with transgenic plants compared to WT.

The project is progressing according to schedule. Additional B. jancea will be produced and confirmed. Transgenic poplar plants will be confirmed with Southern blots to determine the copy number and will be determined for actual gene expression by northern blot. Year 2 will focus on the metal binding in both poplar and B. jancea to determine the plant growth under heavy metal stress

No journal articles submitted with this report: View all 1 publications for this subproject