The goal of our research is to identify and validate ecological thresholds for stream communities impacted by heavy metal contamination from historic mining operations.

1. Application of SiZer to identify ecological thresholds at Yellowstone National Park
Using long-term data collected from the Arkansas River, a metal-polluted stream in central Colorado, we developed a new derivative-based approach that uses locally weighted polynomial regression to detect and quantify ecological thresholds (Sonderegger et al. 2008). The Significant Zero crossings (SiZer) approach (Chaudhuri and Marron 1999) applies a nonparametric smoother to stressor-response data and then examines derivatives of the smoothed curve to identify statistically significant thresholds. The approach makes relatively few model assumptions and is therefore applicable to a broader range of ecological conditions. The novel aspect of SiZer is that it considers all reasonable bandwidths and exploits the notion that different values provide different information about the data. In our previous annual report we described the application of the SiZer model to long-term data collected from the Arkansas River, CO. Below we illustrate the application of this approach to a spatially extensive survey of macroinvertebrate communities in Yellowstone National Park (YNP).

Streams of YNP provide a unique opportunity to identify threshold responses of benthic communities to natural stressors. Many streams in this area are strongly influenced by well-defined gradients of geothermal inputs. High water temperature and conductivity, low pH, and the input of fine sediments associated with geothermal areas are natural features of the Park’s unique aquatic ecosystems. Elevated concentrations of several trace elements, especially arsenic, fluoride and boron co-occur with geothermal inputs (Goldstein et al. 2001). For this retrospective analysis, water quality, habitat and benthic macroinvertebrate data were collected from 52 sites (25 separate streams) in YNP. Sites were located throughout the park and included streams within geothermal and non-geothermal areas of several major watersheds. Quantitative macroinvertebrate samples were collected from shallow riffle areas between August and November, 2002-2007 using a 0.09 m2Surber sampler fitted with a 500 μm mesh net. Eight subsamples were collected from each site and composited. Macroinvertebrate data were used to develop a multimetric index (the Yellowstone geothermal index) to quantify responses to geothermal influences. 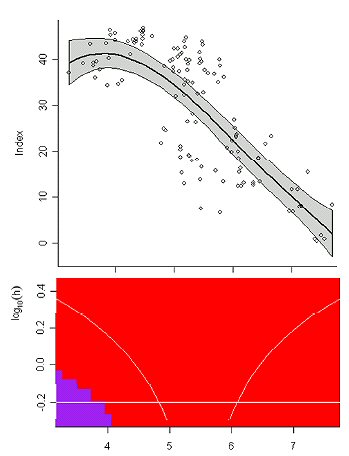 The relationship between the Yellowstone geothermal index and conductivity (a surrogate for geothermal discharges) across sites was highly significant and indicated a distinct threshold response to geothermal inputs (Fig. 1). Results of locally weighted polynomial regression analysis (upper panel) showed that index values increased slightly across low conductivity sites and then decreased abruptly at higher values. Using a bandwidth of h = 0.63 (log10 h = -0.2), SiZer (lower panel) identified a statistically significant change in the slope from 0 to negative (represented by the color change from blue to red) at approximately 4.0 (55μS/cm). These results provide strong support for the hypothesis that responses of macroinvertebrate communities to geothermal inputs at YNP are abrupt and show a distinct threshold at relatively low levels of conductivity. This abrupt decrease in the Yellowstone geothermal index at relatively low levels of conductivity has important implications for monitoring YNP streams and complicates our ability to predict patterns of community composition.

2. The influence of measurement error on responses to metals in the Arkansas River
In ecological risk assessment, it is common to take a measurement of contaminant concentration and use that single observation to represent exposure that organisms experience over some duration of time. Although this is a legitimate practice if there is very little spatiotemporal variation in contaminant concentrations, this is rarely the case. Because of natural variation in stream discharge, temperature, pH and other physicochemical characteristics, contaminant concentrations in streams often show significant temporal variation. For example, Clements (2004) reported significant seasonal variation in heavy metal concentrations associated with stream discharge. Researchers measuring diel (24 h) cycles of heavy metals have also reported that concentrations of Zn can increase by a factor of five from afternoon to early morning (Nimick et al. 2003). Although measurement error is a commonly studied topic in theoretical and applied statistics (Cheng and van Ness, 1999), it has received relatively little attention in the toxicological literature (Yuan 2007). The most well known aspect of this phenomenon is that uncertainty in measuring the predictor variable leads to a substantial underestimation of the relationship between the predictor and response variables.

We used long-term data collected from the Arkansas River to examine the influence of measurement error in metal concentrations on the relationship between heavy metals and macroinvertebrate responses. Because metal concentrations were represented by a single water sample collected on each sampling occasion and because those measurements showed considerable diel variability (Clements, unpublished data), significant measurement error may exist. We used a cumulative measure of metal effects, the cumulative criterion unit (CCU), to quantify metal contamination in this system. CCU was defined as the ratio of the measured metal concentration to the hardness adjusted chronic criterion concentration, summed for each metal. In this research, abundance of metal-sensitive mayflies (Ephemeroptera: Heptageniidae) was used as an indicator of stream health. We used a nonparametric smoothing technique on the CCU values with respect to time and then regressed mayfly abundance on these smoothed values. We refer to the regression of mayfly counts on the raw CCU values as the naive estimator of the slope parameter, and the regression onto the smoothed CCU values as the de-noised estimator of the slope parameter.

Metal concentrations (as CCU) decreased over time as a result of remediation activities in the Arkansas River (Fig. 2, left). Confidence intervals for the de-noised model were estimated based on n=10000 bootstrap samples. Confidence interval lengths for the naïve and de-noised estimators were similar, indicating the relatively small loss of power associated with using the more complicated estimator. More importantly, the slope (β) of the relationship between abundance of heptageniid mayflies and metal concentration increased by approximately 25% when we accounted for measurement error (Fig. 2, right). These results indicate that by ignoring measurement error, water quality managers risk underestimating the strength of the relationship between contaminants and ecological responses.

The final objective of this project will be to apply the new SiZer threshold models that we have developed to a larger data set of metal-polluted and reference streams. We recently completed chemical analyses and macroinvertebrate sample processing for a spatially extensive survey of 150 streams in central Colorado. Including these additional streams in our threshold analyses will greatly increase the spatial scale of our study and improve the predictive quality of our threshold models. These data will also provide an opportunity to examine the influence of landscape characteristics on the location of ecological thresholds.

Chaudhuri, P., and J. S. Marron. 1999. SiZer for exploration of structures in curves. Journal of the American Statistical Association 94:807–823.