Our research is testing the following hypotheses:

Identification of Thresholds Based on Microcosm Experiments

We conducted a comprehensive meta-analysis using results of 16 separate microcosm experiments conducted between October 1991 and August 2003. All experiments examined effects of heavy metals (Cd, Cu, and/or Zn) on benthic macroinvertebrate communities. Analysis of the 16 microcosm experiments showed distinct and highly significant thresholds for measures of species richness. In contrast, most measures of abundance (total macroinvertebrate density and abundance of metal-sensitive mayflies) did not show threshold responses. These results support our hypothesis that the location of ecological thresholds varies among response variables.

Identification of Threshold Based on Spatially Extensive Field Data

Results from a spatially extensive survey of 73 streams along a gradient of metal pollution were used to estimate ecological thresholds in the field. Streams were sampled as part of the U.S. Environmental Protection Agency Regional Environmental Monitoring and Assessment Program (R-EMAP) in Colorado. Results of these analyses showed statistically significant ecological thresholds for most measures of abundance and species richness. Both piecewise linear regression and a monotone spline technique identified a threshold for total mayfly abundance of approximately 1.4 (Figure 1), indicating that significant alterations in benthic macroinvertebrate communities are likely when metal concentrations exceed four times the cumulative criterion unit. 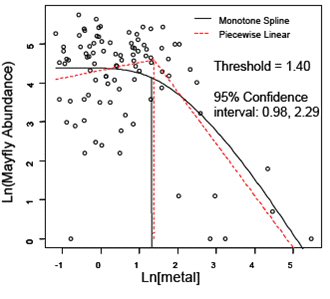 Figure 1. Results of Piecewise Linear Regression and Monotone Spline Analyses Based on Abundance of Mayflies in 73 Colorado Rocky Mountain Streams. CCU = cumulative criterion unit, defined as the ratio of measured metal concentrations to the hardness adjusted criterion values for Cd, Cu, and Zn.

A third dataset was used to assess the ecological significance of thresholds derived from the spatially extensive surveys. Over the past 15 years (1989-2004) our research group has investigated biotic and abiotic factors that affect recovery of the Arkansas River, a Colorado stream impacted by mining pollution. Ecological thresholds derived from spatially extensive surveys were consistent with results of the long-term monitoring and showed that benthic communities recovered when metals were reduced below threshold values (Figure 2). 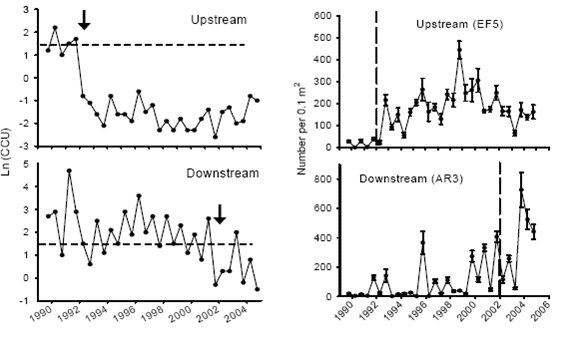 Figure 2. Long-term (1989-2004) Changes in Metal Concentrations (left panels) and Abundance of Mayflies (right panels) at Upstream and Downstream Stations in the Arkansas River, Colorado. The dashed horizontal line is the estimated threshold for metals based on the spatially extensive analysis described above. The arrows and dashed vertical lines indicate when metal concentrations were reduced below this threshold.

Making the appropriate statistical inference about the existence and location of an ecological threshold is problematic in situations where multiple thresholds exist. The conventional definition of a threshold is a point where small changes in the independent variable result in disproportional changes in the response variable and is generally determined using piecewise linear regression. An alternative approach would be to consider all points along the independent variable where the first or second (or in full generality, the pth) derivative changes significantly. Using a nonparametric smoothing technique for the Arkansas River data, we obtained an estimated curve along with its estimated derivatives (Figure 3). Results of this analysis show a threshold in about 1998, the point where the first derivative crosses 0. We believe that a derivative-based definition of threshold makes intuitive and mathematical sense and is sufficiently flexible to accommodate multiple thresholds. In Year 2 of this project, we will investigate the application of several techniques for smoothing data, including weighted polynomial regression and spline models. We also will examine the influence of landscape characteristics on these thresholds. 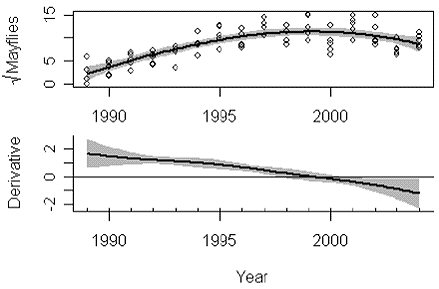 Figure 3. Smoothed Function Showing Abundance of Mayflies in the Arkansas River (top panel) and the First Derivative of This Function (bottom panel) Showing a Threshold in 1998

No journal articles submitted with this report: View all 45 publications for this project