Final Report: The Spatial Patterning of Land Use Conversion: Linking Economics, Hydrology and Ecology to Evaluate the Effects of Alternative Future Growth Scenarios on Stream Ecosystems

The objective of this research project was to determine how the timing, rate, and spatial configuration of land conversion influence stream habitat and ecosystem health in four watersheds in Maryland. Our research team consisted of academicians from ecology, economics, hydrology, and geomorphology, as well as local government scientists and policymakers. Our work proceeded in four phases: (1) identifying the conceptual relationship between land use change, hydrological change, geomorphic change, and stream ecosystem structure and function; (2) collecting new and compiling existingdata on land use and the ecological and geomorphic conditions at 68 sites that differ in the extent and pattern of development; (3) using our data in conjunction with theory to develop models to predict the amount and pattern of future growth (development) in these watersheds and changes in water flow (hydrology) and channel structure (geomorphology) that will result from land use changes; and (4) determining the statistical relationship between empirical (field) ecological data, past and present land use, and the physical data. Our overall goal was to determine the mechanistic links between land use change, the resulting hydrological and geomorphic change, and how all three of these influenced key ecological attributes. Our conceptual model indicating key factors involved in the linkages are depicted in Figure 1. 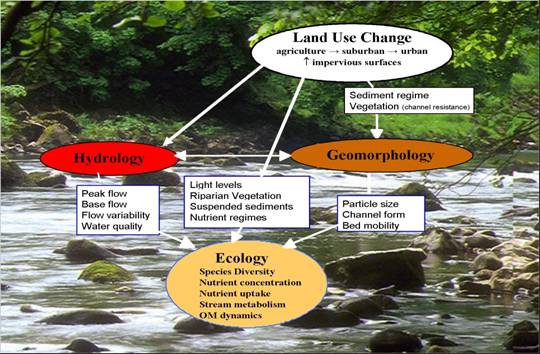 This project involved close work among an economist specializing in land use change (Bockstael), a hydrologist (Moglen), a geomorphologist (Pizzuto), and ecologists (Palmer, van Ness, Wiegand). Each investigator was doing original research on the effect of land use change on streams in four small watersheds in Maryland: Paint Branch, Northwest Branch, Hawlings River, and Cattail Creek (Figure 2). For the empirical work, we established 69 study sites across these four watersheds that were arranged in a hierarchical fashion (i.e., we sampled at the base of headwater streams, at the confluence point of two headwater streams, and so on to the point that the stream reached the mainstem Anacostia River or the Patuxent River; see detailed maps at http://www.watersheds.umd.edu). We worked closely as a team and shared a great deal of data to complete an analysis of the factors controlling land use change in these Mid-Atlantic watersheds, how land use affects peak and base flows, channel geometry, and invertebrate and fish abundance and diversity. We also investigated the effects of land use change on stream metabolism, nutrient uptake, and decomposition.

With respect to land use change, a key goal was to develop further a spatially explicit model of land use change conceived in an earlier U.S. Environmental Protection Agency grant by introducing temporal dynamics (i.e., timing of development, still preserving the spatial dimension), testing the effectiveness of local land policies, and forecasting future land use changes. We successfully recast the economic model of land use change in a real options framework, consistent with recent theoretical advances in the economics literature. This model explains the observed fact that land is not usually developed as soon as would be predicted in a net present value formulation and a deterministic model with irreversibility.

We also were successful in incorporating the complex and spatially varying regulatory environment so that the model now captures the effects on net returns to alternative uses of differing density restrictions, clustering requirements, environmental restrictions, provision of public utilities, Smart Growth provisions, adequate public facilities moratoria, and criteria/scoring of agricultural preservation programs. The chief contribution is a spatially explicit model that is both spatially and temporally dynamic (i.e., it incorporates feedback over time among parcels based on their location in space relative to one another). Land use change forecasting models commonly used by planners often are derived from cellular automata models that also are temporally and spatially dynamic. They are “calibrated,” however, using historical land cover pattern snapshots with no underlying decision process forming the basis of the modeling approach. We have compared one such model (SLEUTH) with our economics model and found that SLEUTH cannot adequately capture the effect of policies, which by definition alter behavior, and because it is not “process-based” regularly confuses correlation with causation.

With respect to the impacts that land use change has had on hydrology, we developed several new GIS-based techniques for modeling land use change and its consequences on flows in small urbanizing (or urbanized) watersheds. Additionally, modeling techniques for adjusting peak flows to a stationary land use signal also were developed. First, we developed an approach to use historical land aerial photography, current land use maps, and tax map information to create an annual time series of spatially distributed land use. Second, we used this land use time series to model the evolution of (mostly) peak flows but also low flows as a function of land use change. Additionally, several different techniques were developed to use modeled changes in flow behavior as a tool to adjust the annual maximum peak flow time series to a single, stationary land use so that it might be properly used for flood frequency analysis. Finally, a new measure, the Hydrologic Disturbance Index was developed as a means of describing changes in peak or low flow behavior along any arbitrary flowpath within a watershed as a function of changes to land use. Several papers were published and numerous presentations were made illustrating these ideas and techniques.

During the project, we completed fieldwork and developed three types of models for geomorphology and sediment transport in urbanizing watersheds. Fieldwork resulted in a suite of data useful for model calibration, as well as a detailed sediment budget for the Good Hope Tributary, a small subwatershed of Paint Branch. The three numerical models we developed included models predicting: (1) changes in stream channel width; (2) sediment yield and the evolution of the bed material grain size distribution of the Good Hope Tributary for 1952-2045; and (3) the morphology and bed sediment characteristics of a reach subjected to changes in discharge and sediment supply caused by varying land use and climate. A model also has been developed that provides comprehensive predictions of the morphology, texture, and elevation of a reach. After considerable experimentation, we have found that the Watershed Erosion Prediction Program is not well suited for predicting the supply of suspended mud from the watershed, and, therefore, we have developed empirical relationships for this purpose. Our empirical equations predict both the volume and concentration of mud supplied to the reach as functions of discharge and the percentage of construction in the watershed. We also have included empirical relationships for estimating changes in pool depth and riffle frequency as functions of land use. These relationships are based on extensive field observation. These variables are particularly important for evaluating fish habitat, and, therefore, it has proven useful to include them in the model. In summary, this rather comprehensive model includes predictions of the state of the bed at a single location in a watershed under conditions of changing discharge and land use.

As part of our ecological work, we completed extensive sampling on all 68 stream reaches within our four-watershed study. The urbanized streams had incised channels, lower baseflow, more extreme peakflows, and low levels of invertebrate diversity compared to the agricultural streams. The agricultural streams, however, had extremely high nutrient levels and very low ammonia uptake compared to the urbanizing streams. Whole stream metabolism also was evaluated and data are being analyzed. Invertebrate diversity was strongly related to land use, showing a linear decline as the percentage of development increased (Moore, et al., submitted, 2004). We found no threshold in the relationship between impervious cover and invertebrate species richness; the relationship was strictly linear and our close evaluation of data from other published work indicates little to no evidence for thresholds despite this commonly held belief. Of particular interest was the high diversity in agricultural watersheds, which we attribute to proactive conservation management and best management practices in our study regions (Moore and Palmer, 2005).

We also found a very strong relationship between invertebrate species richness in our most urban sites and the percent of the riparian buffer that is in forest. To our knowledge, this is the first time anyone has demonstrated that despite high levels of impervious cover (up to 60%), if the riparian forest is intact, then stream invertebrate diversity appears to be somewhat protected. This is not necessarily the case for nutrients, and we believe high nutrient levels at some urban sites that have intact riparian zones may be the result of leaky sewer pipes and run-off from roads. We speculate some of this is from automobile emissions and from atmospheric deposition. Nutrient uptake (NH4) was influenced by the presence of the riparian buffer but also depended on levels of nitrogen in the stream. The results have important implications for local policymakers, because the dominant goals for restoring the Chesapeake Bay are to reduce nutrient and sediment inputs yet the counties and states are using invertebrate biodiversity as a measure of watershed health. Our results suggest the need to not only consider how structure and function are linked in running water ecosystems but to ask what benchmarks should be used to prioritize restoration and conservation efforts.


Journal Articles on this Report : 17 Displayed | Download in RIS Format