Epidemiological evidence suggests that the association between cardiac mortality and PM10 concentrations changes between the summer and winter months in the San Joaquin Valley (SJV). This shift likely is caused by seasonal variation in the size and composition distribution of airborne particles. This project will perform inhalation exposure and particle characterization studies at rural and urban locations in different seasons to quantify the features of the airborne particles that are associated with adverse health effects.

1. Differences in particle concentration, size distribution, and composition that occur as a function of season and location in the San Joaquin Valley (SJV) result in different health outcomes; these outcomes can be detected during inhalation exposure experiments.

A total of 14 field measurement and exposure studies in the SJV were completed during the course of our studies. Twelve studies were conducted in two urban sites located in Fresno, CA (500 East Shaw Avenue) and Sacramento, CA from 2006 to 2011, as well as rural sites located at Parlier, Tulare and Westside, CA during summer and winter seasons. Two studies were completed in Davis, CA. Male Sprague-Dawley rats, male C57/BL6 and male Balbc mice were exposed to concentrated ambient particles (CAPs). Animals typically were exposed for up to 6 hours/day, 5 days/week for 2 weeks. Fine/ultrafine ambient particles were collected and concentrated onsite using a Versatile Aerosol Concentrator Enhancement System (VACES).

CAPs samples collected for all studies during each exposure were analyzed for chemical composition. As a simple example of the analysis performed, size and composition analysis of airborne particulate matter samples collected during the first four experiments demonstrated organic carbon (OC) to be the dominant PM1.8 species during the summertime and NO32- the dominant species in the wintertime. Total number concentrations were larger during the summer sampling events. Fresh ~0.1 µm particles were emitted directly from combustion sources at the Fresno site from 9am-12pm each day while number concentrations at Westside were dominated by nucleation events that ultimately produced particles in the 0.2 – 0.3 µm size range. Most PM1.8 and PM 0.1 metal concentrations were greater during the summer events than the winter events for both sampling sites. PM1.8 Br, Cu, K, P, Sn, Sb, S, and Zn concentrations were greater at the urban Fresno site than the rural Westside site with most of these species having size distribution peaks in the 0.1 – 1 µm range. The urban site exhibited enrichment (12% - 17%) of As and Se in PM0.1 relative to PM1.8 while the rural site exhibited enrichment (11% - 30%) of K, Fe, Rb, and Ca in the PM0.1 size fraction.

The effect of temperature on the volatility of molecular markers used in source apportionment studies also was examined in detail. Two sampling legs were used to collect airborne particulate matter on quartz fiber filters. The first sampling leg operated at ambient temperature while the second sampling leg operated at ~8oC above ambient temperature. Several molecular markers used for the source apportionment of motor vehicle exhaust exhibited significant volatility during some of the sampling events.

Figure 1 illustrates that elemental carbon (EC) and OC are identical in ambient and heated sampling legs. Likewise, polycyclic aromatic hydrocarbon (PAH) concentrations do not exhibit significant volatility at increased temperatures, but hopanes and steranes used as molecular markers for motor oil exhibit significant volatility at increased temperatures. These findings have implications for the use of hopanes and steranes in source apportionment calculations. 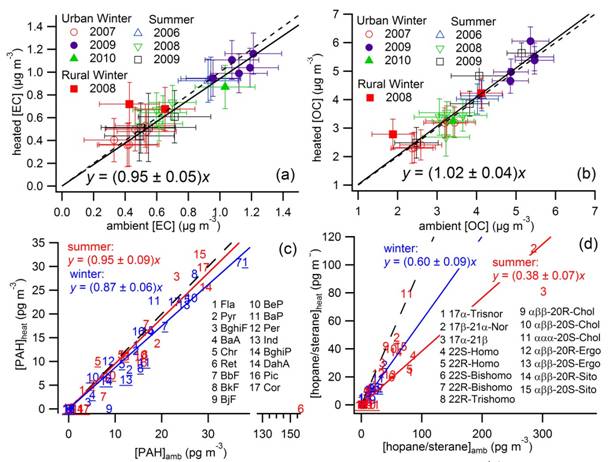 Figure 1. These findings have been published (please see publications) or are in the process of being prepared for submission to scientific, peer-reviewed journals.

2. The increased toxicity of airborne particles during the winter season in the SJV is associated with increased concentrations of ultrafine carbon particles.

A multi-pronged approach was applied in all CAPs studies to examine the cardiopulmonary consequences of particle exposure, i.e., using both whole body to 1) evaluate cellular and inflammatory indicators in the lungs by bronchopulmonary lavage and cytokine measurements, 2) measure vascular components in platelets and other blood elements, 3) examine heart tissues directly for histopathology and 4) measure neurological changes in gene expression for pro-inflammatory cytokines.

Analysis of the PM0.1 size fraction collected during all experiments conducted in Fresno, Parlier, Tulare and Westside, CA, has been performed. Work in Fresno and Westside demonstrated that ultrafine EC concentrations were three times higher at Fresno (urban site) than at Westside (rural site). A consistent seasonal signal was not apparent for any of our studies. Ultrafine OC concentrations were comparable at all sites and seasons, likely because of the partial ban on woodburning in the SJV that has been implemented. We concluded if ultrafine EC drives negative health effects, then the Fresno PM samples should exhibit greater toxicity than the Westside samples. If ultrafine OC drives negative health effects, then the toxicity of all samples may appear similar. We found in our studies that Westside particles appeared to demonstrate greater relative toxicity than Fresno PM (Plummer, et al., 2012 – please see publications).

3. The increased toxicity of airborne particles in the SJV during the winter season is associated with increased concentrations of accumulation mode ammonium/nitrate/sulfate particles.

The chemical speciation for the Fresno and Westside summer and winter studies is shown in the pie graphs for nitrates, sulfates, ammonium ions and other elements. As expected, the concentration of accumulation mode nitrate and sulfate is much larger in winter samples than in summer samples. Sulfate concentrations are consistently ~1 µg m-3 except for Fresno summer, which had a sulfate concentration approximately twice as large. 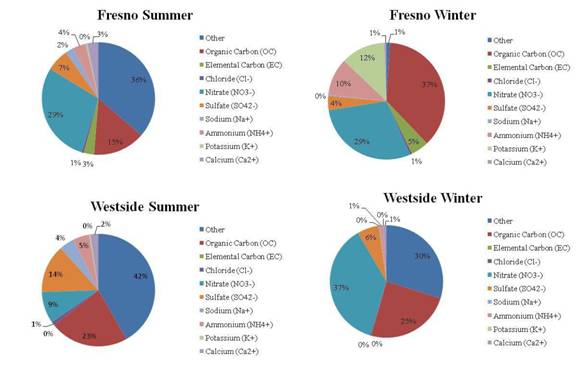 4. The health effects of San Joaquin Valley aerosol can be related directly to the emissions source of the fine and ultrafine particles.

Studies were designed to examine the pattern of the inflammatory response in the lungs and blood of mice progressively exposed to urban PM. Concurrent monitoring of PM concentration and chemical composition provided data for assessment of physicochemical parameters in the context of biologic responses. Male Balb/C mice inhaled concentrated ambient particulate matter (CAPs) for 6 hours/day for 3, 6, 9 and 12 days in Fresno, CA. Markers of pulmonary and cardiovascular inflammation, cell damage and cytotoxicity were measured 24 hours post-exposure. CAPs inhalation produced a duration-dependent inflammatory response in lungs and blood of healthy mice that was significantly influenced by particle mass concentration and chemical composition. These findings strongly demonstrate the importance of understanding the progressive impacts of particle inhalation on inflammation, a risk factor for pulmonary and cardiovascular disease development and exacerbation.

Strong evidence exists for associations between exposure to ambient particulate matter (PM) and adverse cardiopulmonary health effects. Numerous epidemiological studies have correlated increases in ambient PM mass concentration with increased incidence of emergency room visits, hospital admissions and mortality for cardiopulmonary conditions. However, these findings have been difficult to reproduce in experimental studies, suggesting that mass alone does not explain observed health effects. Current national ambient air quality standards are based on particle mass with no consideration for chemical composition. Thus, improved understanding of the relationship between PM exposure and cardiopulmonary health effects can support regulation for improved protection of human health. We have conducted numerous experimental studies in the San Joaquin Valley of California, a region that regularly exceeds the current mass-based standards for PM pollution. Studies were conducted both in the field using inhaled CAPs and in the laboratory to study PM-induced pulmonary and systemic inflammatory responses, a hallmark of adverse cardiopulmonary conditions. Our objective was to investigate these responses in the context of season, location, PM mass and chemical composition. Inhalation studies indicated that chemical composition arising from differences in location and season were critical factors influencing PM toxicity. Further, associations between health effects and PM mass and chemical composition demonstrated that short-term changes in ambient PM concentrations may provide improved interpretation of experimental results. Associations between biological responses and specific chemical components suggest that different sources may have different toxicity. Potential source-specific regulation of the source emitting the most toxic PM components or precursors may have substantial human health benefit. Together, these findings provide biological plausibility for the epidemiological associations between PM exposure and adverse health effects.

Journal Articles on this Report : 16 Displayed | Download in RIS Format