Three current activities are highlighted below: (1) lung architecture and function changes due to premixed flame particle with NMAD 212 nm (PFP212) exposure during development, (2) cell proliferation related gene and protein expression examination after a single exposure to PFP73, PFP212 and DPF230 at 7 days of age, and (3) lung architecture and function changes due to ozone (2 days exposure and 5 days recovery) plus premixed flame particle (PFP73) exposure during development.

The diffusion flame produced a concentration of 2.4x104 particles/cm3 in the exposure chamber with a number mean aerodynamic particle diameter (NMAD) of 230 nm and a mass concentration of 71.7 µg/m3 (DFP230). The premixed flames with φ=2.2, 2.5 produced 9.5x104, 4.3x104 particles/cm3 in the chamber with a diameter (NMAD) of 72.7, 212.0 nm and a mass concentration of 20.0, 67.4 µg/m3, respectively, which we refer to as PFP73 and PFP212. Litters of male Sprague-Dawley rat pups housed with lactating mothers were placed in filtered air chambers at age one day. Exposure for six hours a day, five days a week for three weeks began when the pups were seven days old and ended at 25 days old. A matched set of pups was exposed to filtered air using the same protocol. At 28 days old, the animals were transferred from the exposure chambers to Bioclean hoods where they matured until necropsy at 80-81 days of age. 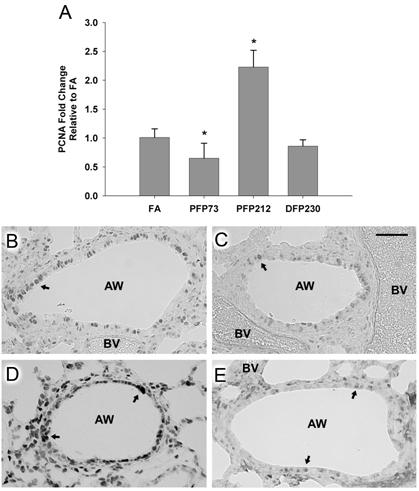 2. Lung architecture and function changes due to periodic exposure to Ozone plus PFP73 exposure during development (52/25)

No significant geometric changes were elicited by co-exposure of ozone with PFP73. Exposure to 52/25 resulted in a significant decrease in the methacholine EC200R indicating increase in airway responsiveness in this group.

Recently, we developed methods for identifying airway geometry in the conducting airways.  The method is described by Lee and coworkers (2008a) and used by Lee and coworkers (2008b) to identify geometry and variability in 6 adult Sprague-Dawley rats.  In this method, the rat lungs are cast using a mixture of silicone and oil, where the lung is bleached once the silicone has cured. A micro-CT scanner is used to scan the cast lung, and in house software is used to generate detailed airway characteristics. The availability of methods and software for quantifying the airway tree, led us to explore the possibility of imaging the airways and the particles deposited in them so that we could quantify airway-by-airway particle deposition.

One of the major shortcomings of using a micro-CT scanner to image deposited particles is that we cannot ensure deposited particles to stay in place during the process of casting, bleaching and imaging. A block-face imaging cryomicrotome from Barlow Scientific, Inc. can be used to image the airways and particles (Barlow and Kelly, 1997; Kelly et al., 2000).  The imaging cryomicrotome serially sections through frozen organs and images the exposed surface using various excitation and emission filters. Slice thickness and imaging resolution can be varied using software and hardware controls to image up to four different fluorescent colors. The imaging method produces voxels as small as 10 um so tissue boundaries and particle locations could conceivably by imaged to this accuracy.  With respect to the initial casting process, the process of casting organs for imaging with a cryomicrotome has been modified to ensure that particles are immobile.

Figure 1a shows this rat’s reconstructed nasal airways viewed from two different viewpoints.  Figure 1b shows the reconstruction of the particle blobs injected into the nasal cavity, viewed from the same vantage points as Figure 1a.  Figure 2a shows a blowup of one of the particle blobs with tissue fluorescence in the background.  Figure 2b shows an image of the lumen in the same plane as the blob. Our experiments with injecting the yellow spots in the rat nose and casting the airway with a silicone mixture shows that the method is feasible to detect particles in the airways.

After the new method for ensuring deposited particles are immobile and stationery during the entire process of necropsy, casting and slicing, an adult rat was exposed to aerosolized Dayglo yellow dye particles for 2 hrs using a aerosol dust generator (Carvacho 2001). The rat was placed in a nose only exposure chamber (Teague 2005). Figure 3 shows the exposure setup, Saturn yellow dye is placed inside the aerosol generator which is aerosolized, the particles pass through an electrostatic neutralizer to remove any charge buildup. The rat breathes the particles flowing into the chamber which is constantly being supplied with air. Rats were exposed to aerosolized yellow dye particles for a period of 2 hours with particle concentration of 1 mg/m3 (approx) monitored using a TSI Dusttrak. The Rat head is cast using a silicone mixture and allowed to cure, once cured the specimen is then shipped frozen to Barlow Scientific for imaging.

Experiments will be undertaken using particles of various sizes and colors, to determine where the particles are depositing in the nasal airways, and also the clearance of particles over time will be studied.  PFP73 exposures with different concentration and exposure to maternal separation (social stress) have been completed and data analyses are currently underway.

Journal Articles on this Report : 1 Displayed | Download in RIS Format