The project will develop new receptor-oriented methods of source apportionment based on the source information in wind speed and direction and the periodic variations of concentrations as extracted from the data by nonparametric regression and Fourier analysis. These methods will be applied to airborne particulate and other air quality data sets nationwide.  Also, the source apportionment aspects of a particulate health-effects study to be carried out in Long Beach, CA will be strengthened by additional analysis of particulate samples for organic and inorganic species funded by this project.

One of the objectives of the proposed research was to determine the community-scale spatial variability of (1) the chemical nature of the PM and (2) the origin of the PM.  To accomplish this objective, we used archived personal cascade impactor sampler (PCIS) filters that were collected at four locations in Long Beach, CA over 10 weeks during the winter of 2005.  The PCIS collects three size ranges of particles: the 0-0.25 mm (quasi-ultrafine, hereafter referred to as ultrafine (UF) for convenience), 0.25-2.5 mm (accumulation (Acc)), and 2.5-10 mm (coarse (C)) size ranges (Singh et al., 2003). These archived PCIS filters were each collected over roughly one week, so in the end we had 120 samples (10 weeks x 4 sites x 3 size ranges).  We used previously developed protocols to quantify 70+ organic species from each of these filters (Dutton et al., 2009).  Using these speciation results, we employed a chemical mass balance approach similar to that described by Kleeman et al. (2009).  Size-resolved source profiles are needed to successfully determine the source contributions. Literature values of sized source profiles do not match the size ranges collected herein.  Thus we assumed that the chemical fingerprint for the important sources was not strongly dependent on size.  Further, we did not have Long Beach specific motor vehicle fleet data so we used the same fleet information used by Kleeman et al., which had been generated for a broader California fleet.  Using this approach, we over apportioned UF and Acc EC, or in other words we commonly accounted for ~ 200% of the EC mass.  Our assumptions must be inappropriate, so we decided to dig deeper into the measurement data for source clues and spatial variability information.  That analysis is summarized below and in Krudysz et al. (2009).

Strong correlations across all sites were observed between steranes in the UF and the ACC size fractions, and they were attributed to motor vehicle emissions.  High correlations between some PAHs in the UF and Acc size fractions were indicative of emissions from poor spark-ignition combustion in gasoline-powered vehicles and incomplete combustion of gasoline derived from light duty gasoline vehicles.

Ratio-ratio plots were used to investigate the relative influence of similar sources on the molecular marker concentrations.  Compounds in all three size fractions were shown to be impacted by two sources with unique emission rates.  Hopanes associated with EC partition preferentially into the Acc fractions, indicating motor oil emissions as the main PM source, while EC not associated with motor oil, perhaps diesel vehicle tailpipe emissions, is found preferentially in the freshly emitted UF particles.  This source hypothesis was further corroborated by the much higher EC/OC ratios in the UF compared to the Acc and C size fractions, whereas steranes were shown to be comparable in both the Acc and UF particles.

Spatial variability was assessed by comparing the same compounds from different sites within each size fraction.  The coefficient of divergence values for organic species did not differ appreciably between size fractions or between compound classes, but comparatively high spatial divergence was observed for most species.  The molecular tracers were more heterogeneous than OC but comparable to EC.  Numerous sources contribute to OC concentrations resulting in relatively low spatial divergence, whereas EC, like the molecular tracers, originates mostly from traffic sources, which are more local and thus increase its spatial variability.

A major goal of this project is the characterization of the periodic variations in air quality and other environmental data since the existence of weekly or monthly periodicities is usually associated with anthropogenic sources.  However, because of missing data and irregular sampling, standard methods of harmonic analysis cannot be applied to most air quality or environmental data in general.  Building on the previous years work, the Lomb version of the Fourier Transform was used to estimate the power and phase in the major periodicities in the data and the first and second harmonics.  This information characterizes, for most environmental time series, the shape and timing of the periodic behavior.  A method to automatically classify and group species by the periodic behavior has been developed. 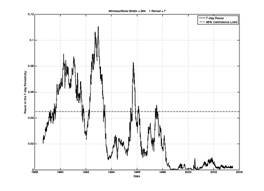 The new hybrid model uses back trajectories along with kernel smoothing methods to locate and quantify the sources of emissions on a local scale using short-term data2. This method is referred to as Nonparametric Trajectory Analysis (NTA). Wind speed and wind direction data from 29 monitoring sites throughout the South Coast Air Basin were used to calculate back trajectories. The concentration of the pollutant at the time of arrival at the monitor is associated with the points along the corresponding trajectory. For a suitably spaced grid of points, the expected value of the concentration associated with trajectories passing near the grid points is calculated by a nonparametric regression analysis method or kernel smoothing.  The kernel function is usually a Gaussian and the smoothing results from a moving average using weights derived from the kernel.  The result is a contour map with the average value of the concentration at the monitor given that the air passes over of near that part of the map.  The only adjustable parameter in the analysis is the kernel smoothing parameter.  If it is too small the results will be very lumpy and clearly under-smoothed, while if it is too large the result will be very broad regions with little variability and clearly over-smoothed.  Generally, an appropriate smoothing parameter is chosen by trial and error, fortunately the results are not sensitive to small changes in the smoothing parameter.   Some of the results seen are in Figure 2. 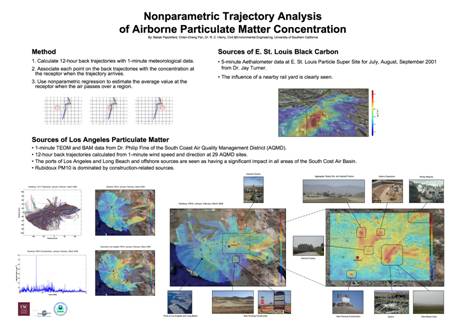 Journal Articles on this Report : 6 Displayed | Download in RIS Format