The project will develop new receptor-oriented methods of source apportionment based on the source information in wind speed and direction and the periodic variations of concentrations as extracted from the data by nonparametric regression and Fourier analysis. These methods will be applied to airborne particulate and other air quality data sets nationwide. Also, the source apportionment aspects of a particulate health-effects study to be carried out in Long Beach, CA will be strengthened by additional analysis of particulate samples for organic and inorganic species funded by this project. The newly developed receptor models will be augmented with the chemical mass balance (CMB) model and the Unmix multivariate receptor model.

This section reports the work of Michael Hannigan and Meg Krudysz.

Size-fractionated particulate matter samples and meteorological data have been collected in the Long Beach, CA area over two season, summer and winter.  Weekly size segregated (0-0.25 μm, 0.25-2.5 μm, and >2.μm) particulate matter samples were analyzed for mass concentrations, organic carbon and elemental carbon concentrations, and elemental concentrations of Na, Mg, Al, S, K, Ca, Ti, V, Cr, Mn, Fe, Co, Ni, Cu, Zn, Sr, Cd, Ba, and Pb.  Further analysis of the filter samples involves quantification of individual organic compounds in each sample and source apportionment.  Each particulate matter sample and corresponding field blank sample have been spiked with internal standard compounds, extracted, and analyzed using Gas Chromatography/Mass Spectrometry (GC/MS) methods.  Calibration curves for quantification of organic species were determined for each compound using particulate standards with compounds of known mass.  An example of a calibration curve is shown in Figure 1.  Based on these calibration curves, individual organic compounds found in each size-fractionated sample were quantified, and the uncertainties in the mass concentrations have been calculated. 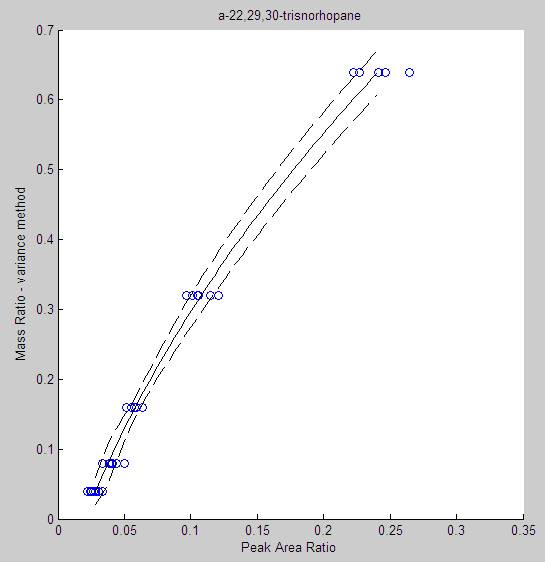 Figure 2 shows concentrations of a-22,29,30-trisnorhopane from the <0.25 μm and >2.μm size fractions in the winter samples.  Each site was sampled numerous times by simultaneously collecting particles in three size fractions, thus allowing for comparisons across spatial scales and particle sizes.  As one of the markers of oil combustion, a-22,29,30-trisnorhopane occurs in a wide range of concentrations depending on site and PM size fraction, but is found at highest concentrations in the ultrafine PM.  Partitioning of the various compounds between the different PM sizes collected at numerous sites can provide information on the spatial distribution of individual compounds and the types of sources contributing to PM exposure in urban communities. Current work involves QA/QC protocols to identify outliers in the quantified samples and possible contamination issues.  All samples are being reviewed and prepared for PMF analysis.

The individual organic compound analysis will allow a complete source apportionment by CMB and PMF methods, and will provide insight into the intra-community variability of PM source contributions on a size-fractionated basis.

The new hybrid model uses back trajectories along with kernel smoothing methods to locate and quantify the sources of emissions on a local scale using short-term data2. This method is referred to as Nonparametric Trajectory Analysis (NTA). Wind speed and wind direction data from 29 monitoring sites throughout the South Coast Air Basin were used to calculate back trajectories. The concentration of the pollutant at the time of arrival at the monitor is associated with the points along the corresponding trajectory. For a suitably spaced grid of points, the expected value of the concentration associated with trajectories passing near the grid points is calculated by a nonparametric regression analysis method or kernel smoothing.  The kernel function is usually a Gaussian and the smoothing results from a moving average using weights derived from the kernel.  The result is a contour map with the average value of the concentration at the monitor given that the air passes over of near that part of the map.  The only adjustable parameter in the analysis is the kernel smoothing parameter.  If it is too small the results will be very lumpy and clearly under-smoothed, while if it is too large the result will be very broad regions with little variability and clearly over-smoothed.  Generally, an appropriate smoothing parameter is chosen by trial and error, fortunately the results are not sensitive to small changes in the smoothing parameter.   Some of the results seen are in Figure 3. 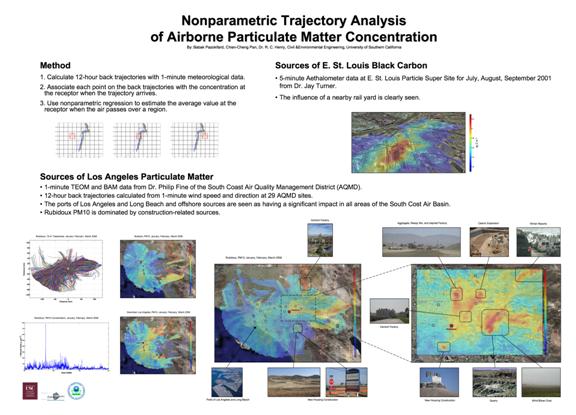 The major objective of the study is to determine the chemical composition of size-fractionated PM at various sites in Long Beach to evaluate PM components and their relationship to various PM sources on a community scale. The already quantified samples from four distinct sites will be analyzed for spatial and temporal trends using specific organic compounds as tracers for various emission sources. This analysis will aid in the identification of the individual organic compounds, or groups of compounds impacting each site and the differences between them given proximity to important PM sources such as freeway, airports, or the ports. Previously studied source profiles for major sources categories in the Long Beach area will be used in conjunction with results from the PMF analysis and chemical mass balance methods to estimate contributions of different source types to the measured pollutant concentrations. Finally, spatial and temporal variability in the source contributions will be assessed on a community scale.