2005 Progress Report: Adsorption and Release of Contaminants onto Engineered Nanoparticles

Little is known about the environmental fate of manufactured nanomaterials. Sorption often is the most important fate mechanism for environmental contaminants. The objective of this research project is to test the following four hypotheses: (1) carbon nanostructures have a high capacity for sorption/desorption hysteresis with polynuclear aromatic hydrocarbons and other common organic contaminants; (2) the sorption capacity of inorganic nanomaterials for heavy metals is the same as the corresponding bulk crystals when corrected for surface area; (3) sorption of naturally occurring humic materials and surfactants to metal oxide and carbon nanomaterials will diminish the sorption capacity of heavy metals on oxides and increase the sorption of hydrocarbons on carbon nanomaterials; and (4) the transport of nanoparticles in soils, sediments, and porous medial will be vastly greater than the corresponding colloids or bulk materials.

During Year 1 of this project, we have characterized successfully the sorption/desorption behavior of both organic and inorganic contaminants to nanomaterials and the fate and transport of naphthalene (an organic contaminant) and colloidal C60 particles in soil column.

Many soils or sediments contain various forms of carbonaceous materials such as coals, kerogens, and black carbons, which have been reported to have high affinity for hydrophobic organic contaminants. C60 might have similarly important environmental impact as to other forms of carbon (e.g., black carbons). Although C60 is virtually insoluble in water, “nano-C60 particles” (a term used to refer to underivatized C60 crystalline nanoparticles, stable in water for months, mean diameter approximately 100 nm in this study) can be formed in water simply by stirring or by dissolving C60 in nonpolar solvents, mixing into water, and removing the solvents. In this study, the adsorption and desorption of naphthalene and 1,2-dichlorobenzene with aqueous nano-C60 particles prepared by both methods was investigated. To compare the adsorptive properties of C60 with other carbons (e.g., naturally occurring organic carbon in soils) and activated carbon, adsorption and desorption of naphthalene with Anacostia River sediment (foc = 3.7%) and activated carbon particles (commercial and nano­activated carbon particles prepared in our lab) also were conducted and compared with that of C60.

was used to describe naphthalene adsorption and desorption with these three forms of carbon, where Kd1st and Kd2nd are solid-water distribution coefficients for the first and the second compartment; q2nd max (µg/g) is defined as a maximum sorption capacity for the second compartment; and the factor f (0 ≤ f ≤ 1) denotes the fraction of the second compartment that is filled at the time of exposure. Data of naphthalene adsorption and desorption with C60 (Figure 1), activated carbon, and soil organic carbon were fitted with this two-compartment model very well, indicating that there may be a common pattern for the adsorption and desorption of naphthalene with these three forms of carbon. Therefore, it may be possible to predict the properties of nano-carbons, such as C60, from that of other carbon forms. This finding may have important environmental significance. 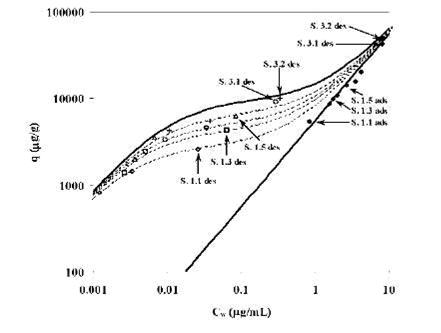 It has been reported that nano-C60 particles are toxic to fish cells and cultured human cells, thus people may be more concerned about the potential exposure to C60 if it is mobile in water. One might expect that C60 would not enter groundwater in great quantities because of the insolubility of C60 in water. Water-stable nano-C60 particles, however, can be formed in water by several simple methods, as discussed above, indicating that C60 might be mobile in groundwater. Besides, dissolved organic matter in groundwater has been reported to enhance significantly the partition of neutral organic contaminants into water and thus enhance the transport of those contaminants. It is unknown whether the release of C60 and other nanosized carbonaceous nanomaterials into aqueous environments will have the similar effect. Therefore, it is of central importance to investigate the C60 transport in water/sediment and its effect on contaminant transport.

The objectives of the current study are to investigate the effect of particle size on adsorption and desorption of typical environmental pollutants (i.e., arsenic and cadmium) onto metal oxide bulk crystals versus nanoparticles (anatase and magnetite) and to examine the competitive sorption between naturally occurring humic materials and heavy metals. In collaboration with Dr. Colvin’s group through the support of the Center of Biological and Environmental Nanotechnology (CBEN) at Rice University, laboratory-synthesized magnetite also was studied. On a surface-area basis, cadmium adsorptions to different sized anatase nanocrystals are similar. The maximum adsorption densities for arsenic to magnetite also are similar for commercially 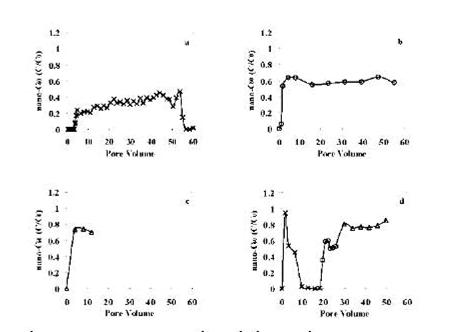 The surface-to-volume ratios of engineered nanomaterials can be as large as 30 percent by number, and clearly, the surface chemistry of these species will be essential for understanding the fate of engineered nanoparticles in the environment. Specifically, research will continue to explore the surface chemistry and adsorption/desorption of environmental contaminants with nanoparticles. Nanomaterials used will include fullerenes, single-walled nanotubes, anatase, magnetite, silica, and alumina. Adsorbates will include humic materials, surfactants, naphthalene, phenanthrene, chlorinated aromatic compounds, heavy metals lead, cadmium, and arsenic. The interaction of uncoated nanoparticles and humic and surfactant coated nanoparticles in the presence of soil and sediments will be determined with batch and column experiments. The sorption and desorption of common hydrophobic organic compounds and of heavy metals to both coated and uncoated nanomaterials will be measured. Contaminant/particle interactions also will be characterized using specific surface probes. This research will provide explicit fate models that can be used in exposure assessment for nanoparticles. With bound adsorbates, a number of spectroscopic tools can be used to discern the coverage and bonding at nanocrystal surfaces.