13 publications for this project

The prairie potholes wetlands of the Great Plains comprise some of the most ecologically valuable freshwater resources of the nation, but they are also exceptionally vulnerable to anthropogenic stressors, particularly those associated with agricultural land use practices. They are also considered likely to be severely impacted by climate change. In this study we have quantified relationships among stressors associated with climate, agricultural land use and amphibian communities throughout much of the prairie pothole region.

The specific objectives of this project were to:

To achieve our objectives we gathered and integrated data from three hierarchical levels: landscape (referred to in the text as Extensive scale studies), wetland (Intensive scale), and mesocosms. At the landscape scale we established relationships among amphibian community structure, composition and land use, and wetland permanence types across the majority of the U.S. portion of the PPR east of Montana. Wetland scale studies focused on examining relationships among individual wetlands (including hydroperiod and other physical and chemical wetland characteristics), land use (including pesticide use), UV-B, amphibian abundance and community structure, and indices of amphibian health. In mesocosm experiments we focused on quantifying the effects of multiple stressors (hydroperiod and pesticide exposure) on amphibian development and health in artificial ponds.

Summaries of major methods development and results of the studies are reported in the form of extended abstracts in the body of the report that follows. In addition, a final summarization of the various results is included. A digest of results from each of the major portions of the project completes this executive summary.

Semi-permanent wetland hydroperiods were not as markedly affected by a uniform 3°C increase in air temperature, with only a 2% reduction in years with hydroperiods of 90 days or more. Earlier model results suggested that increasing atmospheric temperatures would result in semi-permanent wetlands drying more often and that semi-permanent wetlands located in the south and east of the PPR would come to resemble seasonal wetlands, which breeding R. pipiens prefer. However, semi-permanent wetland density is low in this area, which is dominated by row crop agriculture. According to our logistic model, these characteristics are not optimal for northern leopard frog breeding. Thus amphibian metapopulation survival will depend on both the landscape context in which the remaining wetlands are embedded (e.g., inter-wetland distance and surrounding land use), and on local conditions within the wetland.

Introduction
The prairie potholes of the Great Plains comprise some of the most ecologically valuable freshwater resources of the nation (Hubbard 1988, van der Valk 1989). The diversity of wetland hydrologic regimes and the abundance of macroinvertebrates and plant life in these wetlands provide critical habitat for breeding waterfowl, stopover areas for millions of migrating birds, and habitat for amphibian species. Because of their high productivity and importance for flood storage and habitat, these wetlands represent a critical aquatic resource that should be managed on a regional basis to ensure the persistence of the ecological services they support.

Increasing temperatures and/or reduced precipitation in the Prairie Pothole Region (PPR) can be expected to change the hydrologic regime of PPR wetlands, eliminating some and modifying functions in others. In addition, existing stressors associated with agriculture (e.g., draining and impoundment), may make the PPR wetlands especially susceptible to the effects of climate change. Finally, pesticides could interact with climate change effects in as yet unknown ways, resulting in negative consequences for wetland biota.

Hydroperiod may be the best indicator of climate change impacts on wetlands, given its controlling effect on vegetation composition, habitat, and other ecosystem services. Larval amphibians are extremely sensitive to changes in hydroperiod, which may directly affect the diversity and abundance of metamorphosing juveniles. Furthermore, the interactions of stressors associated with climate change (e.g., hydroperiod) have been implicated in global amphibian declines. Because amphibians may integrate effects of climate change and pesticide exposure on wetlands, they are considered excellent indicators of the potential effects of these stressors on aquatic ecosystems.

Objectives
The overall objective of this project was to quantify the relationships among factors directly affected by climate change (e.g., hydroperiod), differing land use, and amphibian community structure and composition in the prairie pothole region (PPR) of the U.S. Specific objectives were to: 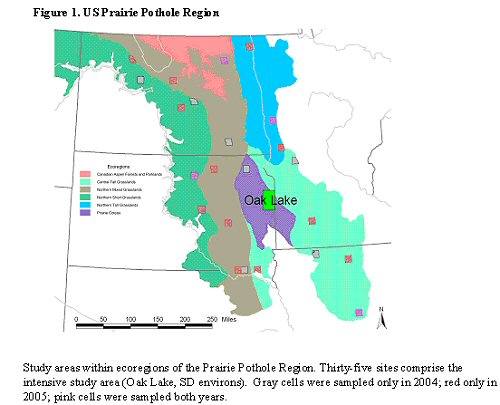 All sites were stratified based on hydrologic regime (seasonal v. semi-permanent) and land use (grassland v. cropland). Semi-permanent wetlands are relatively deep, discharge wetlands with surface water persisting through the ice-free season in most years. Seasonal wetlands are shallower, and were normally inundated from spring to mid- or late summer. Hydrologic regimes were determined using the USGS Wetland BASINS data for wetlands with seasonal or semi-permanent hydrologic regimes. Isolated wetlands between 0.5 hectares and 5.0 hectares were selected. Land cover was summarized in 90 meter buffers surrounding these selected wetlands to classify wetlands as "cropland" or "grass"; basins with 70 percent or greater row-crop coverage in the 90 m buffer were classified as "cropland" and basins with 70 percent or greater pasture/hay or grassland were classified as "grass."

Intensive sites were selected across stressors gradient from the crop-rich southern PPR to the grassland-dominated northern PPR. We used National Land Cover Data (NLCD) classes for site selection; sites that met land cover, size, and hydrology criteria were randomly selected for field verification and sampling. A total of 35 sites were included in the Intensive study.

For the Extensive portion of the study we selected 114 wetland study sites based on a random design that incorporated ecoregion, land use and wetland hydrologic regime as stratification levels. GAP land cover data was used for Extensive site selection. Sites were distributed across the 5 ecoregions found in the PPR, with the number of sites weighted by the ecoregion’s proportional area in the PPR.

This research has been supported by a grant from the U.S. Environmental Protection Agency’s Science to Achieve Results (STAR) program. Award number RD-83087901.

Although the research described in this report has been funded wholly or in part by the U.S. Environmental Protection Agency’s STAR program through grant (number), it has not been subjected to any EPA review and therefore does not necessarily reflect the views of the Agency, and no official endorsement should be inferred.

No journal articles submitted with this report: View all 13 publications for this project