2 publications for this project

Final Report: Models and Measurements for Investigating Atmospheric Transport and Photochemistry of Hg

The project seeks to develop a 3-d Eulerian model for transport and photochemistry of mercury, including fully integrated gas-phase, aqueous and aerosol chemistry.  It also seeks to develop detailed comparisons between model results and measurements from field campaigns.

Reactive mercury in the troposphere is associated with critical uncertainties that are important in terms of both science and policy.  These include:

The project seeks to use model results to investigate these issues.   A major objective will be to identify measurements that might provide evidence on these issues.

A new version of the Community Model for Air Quality (CMAQ) was developed that included the ability to model the emissions, photochemistry, transport and deposition of reactive mercury.

CMAQ is a 3-d Eulerian model that represents transport and photochemistry of air pollutants, including ozone, sulfates and particulates, and is widely used for regulatory applications and for scientific applications.  Other versions of CMAQ have been developed that include mercury [e.g. Bullock and Brehme, 2002].  However, the version developed here represents a significant improvement because it includes an integrated solution for gas-phase and aqueous-phase chemistry, and a more comprehensive set of photochemical reactions.

The original CMAQ includes separate calculations for the effect of gas-phase and aqueous-phase chemistry.  The change in concentration fields due to gas-phase photochemical production and loss is calculated for a specified time interval, followed by a separate calculation of the effect of aqueous-phase photochemical production.  This representation allows for interactions between the gas and aqueous phase only for time scales of longer than 10 minutes (and usually only for time scales of longer than one hour).  This is not adequate for radicals such as OH and HO2, which strongly influence mercury and which are affected by gas-aqueous exchange on time scales of one minute or less.

The modified CMAQ includes a combined calculation of gas-phase and aqueous-phase photochemistry, and includes near-instantaneous interaction between gas and aqueous phases (limited only by physical time constraints).

The modified CMAQ should provide a research-grade tool that will supplement the versions designed for regulatory purposes.

The model was used to simulate several events in Florida during June 2000, corresponding to an aircraft-based field measurement campaign.  The model domain included the eastern half of the U.S., and therefore included mercury formation, transport and deposition in the northeast and Midwest as well.  Results are as follows. 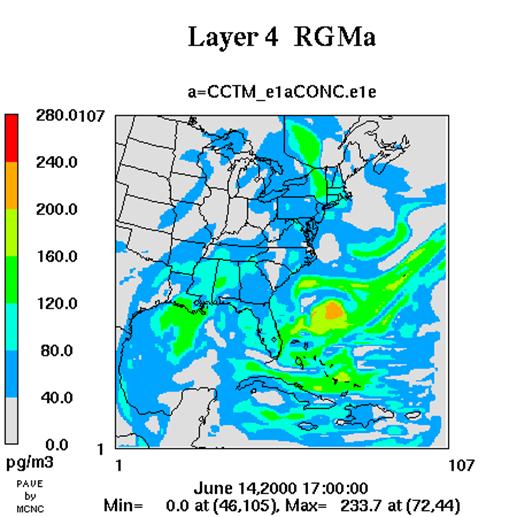 The high RGM over the Atlantic Ocean may contribute to the observed high wet deposition of RGM in Florida.

Elevated RGM in the model is consistent with aircraft measurements.

Aircraft measurements in south Florida showed RGM from 8 to 248 pg m-3.  Peak RGM in the model for south Florida was significantly lower (126 pg m-3).  However, the model predicted up to 233 pg m-3 over locations in the Atlantic Ocean near Florida on the days with the highest measured RGM (see Figures 1 and 2).

Figure 2.  Measured RGM (pg m-3) versus altitude (km) from aircraft measurements over south Florida and the adjacent Atlantic Ocean during June, 2000 (points).  The line represents model Hg(II) versus altitude, based on an average of model results during the afternoon on the five days (June 9, 12, 14, 25 and 26) that coincide with measurements.

The measured RGM was consistent with the range of RGM in the model (15-233 pg m-3 for the full model domain) and with the predicted intermittent nature of elevated RGM.

Observation-based methods identify whether RGM is controlled by local emissions or by global-scale transport.

Elevated RGM in the model is produced from two sources:

When elevated RGM was due to direct emissions, RGM correlated positively with Hg0 (reflecting concurrent emission of both species).  RGM was also positively correlated with SOx and NOx.

Measurements of these species can be used to evaluate model predictions concerning source attribution for mercury.

Ambient RGM is positively correlated with O3 during pollution events. The elevated O3 may cause a significant increase in RGM.

The model period included region-wide pollution events with up to 120 ppb O3 in the Midwest.

When NOx, VOC and the resulting elevated O3 were reduced in the model, ambient RGM was reduced by up to a factor of two.

Environmental significance of the project

Results of the project have direct significance in connection with attempts to control mercury in the atmosphere.  Control of atmospheric mercury has been given a high priority by EPA as a result of its possible damaging effects on both human health and environment.

Identifying the source of reactive mercury is critical to the success of efforts to develop effective control strategies.  In particular, it is necessary to identify the relative impact of local emissions as opposed to global-scale processes as sources of mercury.

Results from this project have contributed in the following ways.

No journal articles submitted with this report: View all 2 publications for this project