Final Report: Experimental and Detailed Mathematical Modeling of Diffusion of Contaminants in Fluids

The research objectives for this work were:
1. Construct basic mathematical model of contaminants in fluids by using two compartment method.
2. Examine effectiveness of thin layer caps on contaminated bed sediment.

The method used was a two-compartment model made up of the contaminant and water or soil enclosed in a contained structure. The rate of transport of the contaminants was modeled by a system of first order differential equations.

In the course of this project, we studied the relevant modes of fate and transport processes of contaminants such as molecular diffusion, dispersion, adsorption. description, chemical reaction, biodegradation, sediment deposition and resuspension, advection, erosion, and bioturbation. In addition, the effects of density, thermal, pressure, and concentration gradients were examined. This aspect of our work is to enable us determine the order of importance of these processes as they pertain to the medium in which the transport is taking place.

An alternative to conventional in-situ capping of contaminated bed-sediment was proposed. The
method proposed entails periodically distributing (at 3-month intervals) a thin layer (about 1 cm. in thickness) of silt particles' onto the contaminated bed. Lake Swaytoe in Russia, contaminated with Cesium 137, is used for the case study on theoretical model calculations. Due to Cs-137 adsorption on the silt the cap acts as a barrier, reducing the concentration in the porewater; burial of contaminated solids also occurs with subsequent application of layers. Over time, bioturbation enhanced particle transport mixes clean sediment with contaminated sediment thereby reducing the effectiveness of the cap. Particle interchange is modeled over time to predict concentration levels and to adjust the appropriate time interval for putting on a new layer. The results indicate bed surface porewater Cs-137 concentration can be reduced by over 65% in the first year after four applications of thin layers.

A diagram of our mathematical model appears in Figure 1 while a plot of our calculations for the base case of 1 cm. cap added every three months to a 5 cm. layer of contaminated sediment is shown in Figure 2. It was further demonstrated that the effectiveness of the cap could be further enhanced either with an increase in the cap thickness or the partition coefficient of cap material. 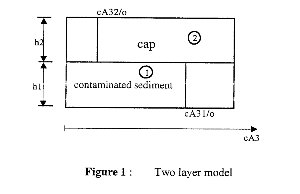 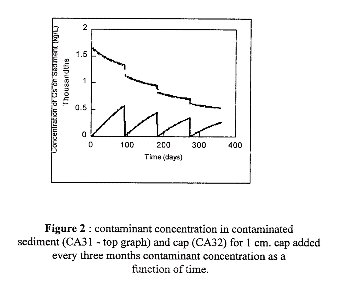 No journal articles submitted with this report: View all 2 publications for this subproject