Improved documentation and understanding of the global pervasiveness of human-induced ecosystem changes requires us to acknowledge that virtually no ecosystem on earth completely retains its prehistoric structure and function (Vitousek et al. 1997). Human-induced changes are especially evident in the coastal zone, where dramatic population growth in the past century, along with attendant shifts in land-and water use patterns, industrial development, and natural resource harvesting (Matson et al. 1997; Vitousek et al. 1997; Dayton et al. 1995) are often accompanied by a shift from clear water, macrophyte-dominated conditions to very turbid, plankton-dominated waters (Duarte 1995). Correlated effects, such as noxious algal blooms (Vitousek et al. 1997) and large volumes of hypoxic and anoxic waters (RabaIais et al. 1996) are also common along heavily developed watersheds and shorelines. Currently unavailable, however, is a mechanistic understanding of how human-induced modifications singly, and most importantly, in concert, produce changes in the structure and function of coastal ecosystems. To make progress in developing this mechanistic understanding we have designated the following as primary goals of the Alabama Center for Estuarine Studies (ACES): 1) the use of sustained experimentation and observation to understand how the most common human-induced modifications of the coastal zone produce changes in ecosystem structure and function; and 2) the application of this understanding to develop prudent management strategies for sustaining the productivity of our coastal land and seascapes.

We will focus our efforts on some of the most common, yet incompletely understood modifications of the coastal zone, both singly and in concert. We are especially interested in:

These are some of the most important issues affecting coastal environments nationally, and are also considered to be the most pressing in the northern Gulf of Mexico and Alabama coastal waters. A conceptual framework for how these factors are believed to interact is outlined in Figure 1.

Examples of potential projects could include assessing the consequences of exotic species introductions (e.g. Eurasian water milfoil) on native oligohaline ecosystems, (under the "Biotic Introductions and Removal" link), or the effects of changing land use patterns in the watershed (e.g. shifts in clear-cutting activities) on the entire estuary (under the "Land Use" link). Where appropriate, investigators will be encouraged to use manipulative field experimentation to address the focus areas listed above, and to assess the effects of multiple stressors concurrently. While field experiments are not always feasible or appropriate, the use of carefully designed manipulative experiments will help us move forward at the most rapid rate in achieving our goals.

Ocean Sciences Division: Regular Grants, which will usually include multi-year funding in the amounts of $30-$150K annually and be subject to rigorous peer review; and Small Grants for Exploratory Research (SGER), with funding usually for one or possibly two years in the range of $1 O-30K per year, and greater flexibility for investigators to initiate new areas of study or develop proof of concept for potentially risky research efforts.

This program will continue to solicit proposals that address these areas of interest. These will be evaluated by a Scientific Advisory Committee (SAC), comprised of scientists and administrators external to the University of South Alabama. Successful proposals will be funded for up to three year. There will be periodic review of the proposals; their results will be available through the Internet via EPA and ACES web pages. All projects are subject to strict Quality Assurance/Quality Control criteria as determined by the designated QA/QC officer.

Round three grant support will emphasize smaller (pilot, experimental) grants, as per recommendation by the Scientific Advisory Committee. These will be in the $10K to $30K range. One or two larger comprehensive proposals will also be considered for funding. It is anticipated that a substantial portion of year three funding will be carried over to provide additional funding in future years for the more productive of the pilot projects. IN addition, some funds may be used to help recruit a new faculty member in the marine/coastal science area.

The ACES Scientific Advisory Committee (SAC) is comprised of 10 scientists and science administrators with extensive expertise and experience in the area of coastal and estuarine science. They represent a wide diversity of subdisciplines, as reflected in their CVs (on file). At present, two members of the SAC (representing the subdisciplines of socioeconomics and remote sensing) may be replaced because of conflicts in their schedules. Recommendations for their replacement will be forward to the EPA program manager. 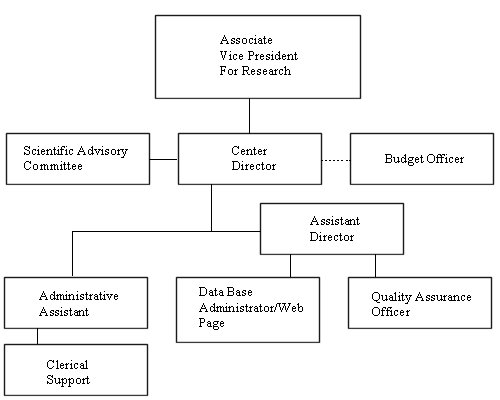 Dr. James L. Woe - As Associate Vice President for Research, Dr. Wolfe has oversight responsibility for all university research activities, including ACES. Dr. Robert L. Shipp, Jr. - As Center Director, Dr. Shipp is responsible for overall management and operation of ACES, and for interacting with the EPA Project Officer.

Dr. Kenneth L. Heck, Jr. - As Assistant Director, Dr. Heck will focus on the scientific goals and directives of ACES and, together with the Director, associated faculty and staff will be responsible for developing and articulating the annual scientific plan.

Mr. Michael R. Dardeau - As Quality Assurance Officer, Mr. Dardeau is responsible for overseeing the ACES Quality Assurance plan, for reviewing QA compliance of all ACES-sponsored studies, and for regularly reporting quality issues to the Director.

Ms. Randy L. Schlude - As Data Base Administrator, Ms. Schlude is responsible for working with investigators to ensure the quality of data generated by ACESsponsored programs and for maintaining the ACES database.

Ms. Carolyn F. Wood - As Administrative Assistant, Ms. Wood is responsible for providing administrative support for the Director and the Center staff and investigators, for maintaining essential records and Center documents, and will serve as the point of contact for those interested in receiving information about the Center's activities.