The overarching goal of this project is to evaluate the role that climate change may play in altering penetrance of ultraviolet (UV) radiation over coral reefs and potentially contributing to coral bleaching. This entails examination of both UV-specific stresses upon corals and factors that influence UV penetrance over the reefs. Our objectives are to: (1) develop immunofluorescence techniques to examine UV-specific lesions in DNA (thymine dimers) of coral and zooxanthellae; (2) determine whether UV-induced DNA damage and indices of coral bleaching are correlated, including laboratory and field assessments of photoprotective pigment concentrations; (3) further examine the relationships between temperature, UV, and coral bleaching in controlled experiments; (4) measure underwater solar UV irradiance and attenuation coefficients as well as to develop continuous observations of chromophoric dissolved organic matter (CDOM) concentrations and algorithms that relate CDOM concentrations to UV exposure of coral assemblages. This brief report focuses on our accomplishments related to Objectives 2 and 4; these were our primary focus for the year.

To determine whether thymine dimers are a suitable indicator of solar radiation exposure, we questioned how thymine dimers vary diurnally and whether effects are cumulative from day to day. In 1999, we transplanted P. porites on plastic plates fixed to a PVC rack at the experimental site at Eastern Sambo Reef. Four replicate samples were removed at 0830, 1300, and 1800 hours daily for 2 days and at 0830 and 1300 hours on the following day. The coral were split, and half of each coral sample was preserved for thymine dimer assays at the Bodega Marine Laboratory, including both immunolocalization and dot blot assays. The other half was preserved for analysis of chlorophyll content, tissue protein, and zooxanthellae counts at the U.S. Environmental Protection Agency (EPA) Gulf Ecology Division (GED). Data for Day 2 (Figure 1) indicate surprising variability in response among coral colonies. Colonies 1, 3, and 4 responded with a lag in dimer induction with dimers increasing after 1300 and 1800 hours (Colony 3), although the peak in dimer induction is observed between 1300 and 1400 hours (Figure 2, 305 nm). This lag in dimer induction is not unprecedented for aquatic species (Lyons, et al., Marine Biology 1998;130:537-543). However, the observation that Colony 2 exhibited an inverse pattern merited further consideration. 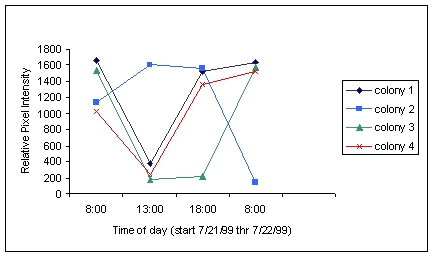 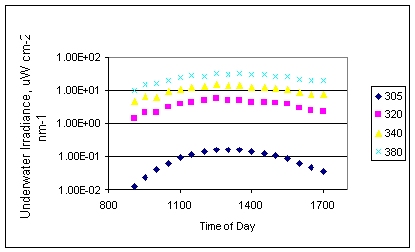 Descriptive studies were conducted in the summer of 2000 to further characterize variability in thymine dimer induction among coral colonies. Coral were sampled at 0830, 1300, and 1800 hours, and five replicate pieces were taken from each of three colonies. In addition, Colony 2 was sampled more intensively with an additional two timepoints at 1100 and 1500 hours. Results of these studies are not yet available.

In the laboratory validation portion of the study, we are using a solar simulator (installed at GED) to relate UV exposure to coral bleaching. We assessed the effects of UV radiation in isolation from other environmental variations to examine the dose range required to induce bleaching. These experiments were conducted for five geographically and taxonomically diverse species of coral (Montipora capitata and P. compressa from Hawaii, P. porites from laboratory culture, and Acropora cervicornis, Medracis mirabilis, and P. porites from the Florida Keys). Data obtained to date indicate that pigment induction in P. porites provides protection from UV-induced damage in DNA.

Research continued during 2000 on factors that affect UV exposure of coral assemblages in the Florida Keys. These activities included: (1) measurements of underwater solar UV radiation at various sites located in close proximity to the coral reefs in the Lower Keys; (2) measurement of optical properties of water samples collected at these sites; (3) development of algorithms that describe the penetration of UV radiation into the Florida Keys water; (4) deployment of fluorometers for the measurement of UV-protective colored dissolved organic matter (CDOM) at two SEAKEYS CMAN towers located at Sand Key (near Key West, FL) and Sombrero (near Marathon, FL) sites; and (5) initial research on thermal stratification effects on UV penetration and on UV attenuation by CDOM derived from Florida Bay sea grasses and mangroves.

UV measurement profiles of downwelling and upwelling irradiance at 305, 325, 340, 380, 412, 443, and 555 nm for the water column were obtained using a Satlantic OCP-100 free-falling instrument. The sites for these measurements were located close to the coral reefs at Looe Key, Eastern Sambo, and Maryland Shoals. The latter site was the location for the underwater coral experiments. Water samples were collected at the sites, and absorption spectra were obtained after filtration. These experiments were conducted during July-August 2000 using the Mote Marine Laboratory on Summerland Key as a base where various spectroscopic instruments and a solar simulator transported from the EPA Laboratory in Athens, GA, were located. As in 1999, profiling was conducted at high and low tide along transects, which included a series of sites ranging from deep water outside the reefs across Hawk Channel into sites located close to land. Profiling and water sampling also were conducted at Sand Key and on transects from Florida Bay under the Seven Mile Bridge into Hawk Channel near the Sombrero tower, where major amounts of UV-absorbing CDOM are transported into the region contiguous to the Lower Keys reef system. In all the cases that we examined, except in stratified waters, the depth dependence of the UV irradiance could be described by an exponential equation:

is the diffuse attenuation coefficient of the water at wavelength

was determined by exponential fits to the irradiance versus depth profiles. The diffuse attenuation coefficients for the UV region (290-400 nm) correlated closely with absorption coefficients measured for the CDOM in filtered (0.2 µm) water samples that were collected at the same time that the profiles were measured. These results indicate that CDOM controls the UV exposure of the coral reefs in the Lower Keys. As we observed in the 1999 studies, the

generally increased (and UV penetration decreased) along transects from the reef north across Hawk Channel towards land. During 2000, however, we observed that the UV attenuation in Hawk Channel was quite variable and that the "bluewater" from the Atlantic south of the reefs was occasionally pushed in by wind and tidal action to within a mile of land. The high attenuation of UV in water derived from Florida Bay and from sea grasses and mangroves near the reefs indicate that all of these are major contributors to CDOM in the Lower Keys.

As shown, in Figure 3, the transmission of UV in the water was strongly affected by stratification. Note in this figure that stratification is indicated by the sharp drop in water temperature between 30 and 40 meters, a region called the thermocline. Also, note that the UV penetration (data for 305, 325, 340, and 380 nm) is generally much lower than that of visible radiation (412, 443 nm). Above 30 meters, the irradiance decreases exponentially. Generally, for all wavelengths that are affected by CDOM absorption (290-450 nm), there is a flattening in irradiance versus depth profiles at the location of the thermocline. This flattening was not observed in the case of 555 nm light, a spectral region where CDOM does not strongly absorb. These data show that UV and short-wavelength visible radiation penetrates more deeply above than below the thermocline in stratified water. The change at the thermocline supports the hypothesis that photobleaching of the CDOM in the upper water layer enhances UV penetration under stratified conditions. Other studies conducted during the year 2000 showed that the absorbance of the CDOM in Lower Keys waters decreased on exposure to simulated solar radiation. Unfortunately, 305 and 325 nm irradiance could not be reliably measured below the thermocline but the effect is particularly evident at 380 nm. 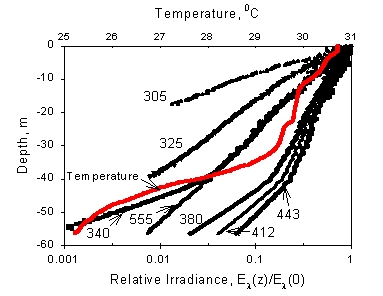 Key activities for 2001 include:

1. Conducting temperature X UV interaction experiments in the Florida Keys and in a laboratory solar simulator at GED.

2. Completion of an action spectra for thymine dimer induction.

3. Identification of CDOM sources as well as factors that drive CDOM degradation.