2002 Progress Report: Assessment of the Consequences of Climate Change on the South Florida Environment

This research project involved a multidisciplinary team of researchers led by the Center for Marine and Environmental Analyses (CMEA) at the University of Miami, collaborating with the South Florida Water Management District (SFWMD) and the U.S. Geological Survey (USGS). The objective was to conduct an ecological risk assessment to evaluate the potential effects of changes in precipitation and freshwater deliveries caused by climate change and by the Comprehensive Everglades Restoration Plan (CERP) on ecological systems of the South Florida landscape. A suite of linked simulation models are being developed to simulate and evaluate potential impacts on the: (1) regional surface and groundwater hydrology; (2) abundance and distribution of wading birds within the Florida Everglades; (3) freshwater inputs into Biscayne Bay and associated salinity fields; (4) seagrass and hardbottom community productivity and distribution; and (5) population dynamics and stock abundance of estuarine fish.

The hydrology of South Florida is controlled by an extensive system of canals, levies, and water control structures that regulate freshwater flows across the landscape. Direct links were created from outputs of the hydrological models: the South Florida Water Management Model (SFWMM), developed by the SFWMD to describe overland and groundwater flow dynamics for the region, and the Biscayne Bay hydrodynamic model, developed at CMEA. Similarly, the Biscayne Bay hydrodynamic model was linked to a series of ecological models developed at CMEA that describe the population dynamics of segrasses, sponges, and fisheries resources. In addition, the outputs from the SFWMM were used as inputs to the Across-Trophic Level System Simulation, developed by the USGS, to simulate effects on the long-legged and short-legged wading birds of the Everglades. The seamless modeling framework, developed with the support of the U.S. Environmental Protection Agency (EPA) Global Change Research Program (see Figure 1), enables us to directly simulate the effects of water management scenarios, as well as different climate change scenarios on the hydrology of South Florida, and to evaluate the potential effects of these scenarios on important ecological and economic endpoints of Biscayne Bay and the Everglades. 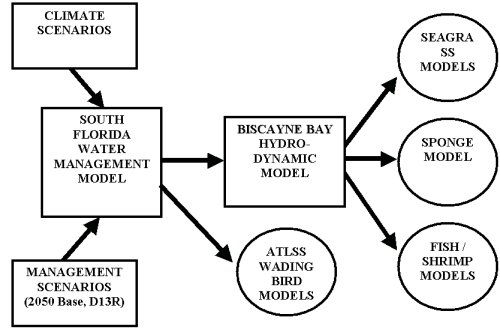 Figure 1. CMEA modelling framework used to assess the potential impacts of Climate Change and the Everglades Restoration Project on the biological endpoints of the South Florida landscape.

The basis for our approach was the ecological risk assessment framework developed for the EPA. A scenario-consequence analysis approach was used, in which paired scenarios were developed to characterize the effects on selected ecological endpoints from changes in precipitation caused by climate variability, from implementation of the CERP project, or from both. Our assessment was conducted as a sensitivity analysis, where a realistic, plausible range of climatic conditions was explicitly simulated and tested. The following simulation scenarios were developed using historical precipitation and temperature data, based on the 1965-1995 record available for South Florida, modified by a set of global climate change scenarios developed at a climate change scenario workshop: