25 publications for this project

The overall objective of this research project was to develop protocols for environmental assessments of alpine lakes in the Sierra Nevada with a range of human impacts. These assessments were conducted over the range of levels of biological organization (molecular to ecosystem) utilizing currently available assessment techniques and with the addition of two new ecological indicators. The use of population genetics analysis as a response indicator and the use of molecular biomarkers of exposure to contaminants as a diagnostic indicator were proposed for incorporation into monitoring and assessment programs for surface waters. These indicators were used to provide information concerning the status of population diversity and stability and concerning the exposure to nonpersistent, nonbioaccumulative contaminants.

The overall objective was met by addressing the following four specific objectives:

Miami University, University of Nevada at Reno, and University of California at Davis Tahoe Research Group participated in the U.S. Environmental Protection Agency (EPA)-sponsored project, Multi-level Indicators of Ecosystem Integrity in Alpine Lakes of the Sierra Nevada, throughout the period of funding. Field work and laboratory analyses followed the guidelines set forth in the Environmental Monitoring and Assessment Program Surface Waters Field Operations Manual for Lakes (EPA/620/R-07/001). Deviations in sampling procedures and laboratory analysis occurred when the physical features of the water body or sample collections did not lend themselves to prescribed methods. Forms adapted and used for the assessments are available in PDF format. During the summer field seasons from 2000-2002, a total of 16 sites were completely surveyed, representing 14 separate lakes. Marlette Lake, sitting on the eastern crest of the Lake Tahoe basin in Nevada, and Donner Lake, in Nevada County, California, were sampled each field season. In addition, the summers of 2002 and 2003 were used to resample lakes where data were missing or analysis indicated a need for additional data.

Table 1 presents a summary of site locations and characteristics and a summary of assessment results for all lake sites. Preassessment categories were determined using information about the types of activities known to occur in the area (e.g., housing, boating) and anectdotal information gained by people who lived in the areas. Postassessment categories were determined using a combination of the physical habitat assessment, chemical and biological characteristics, observed human influences, and molecular biomarkers of contaminant exposure. Lakes were ranked from low (good) to high (bad) for each of these subassessments. Values of subassessment ranks were summed to derive the postassessment impact scale. The postassessment impact category was then determined by natural break points in the assessment scores (change in score of 20 or greater). This resulted in a reclassification of several lake sites. Eagle Lake (in Desolation Wilderness, southwest corner of Lake Tahoe Basin) was the only lake that remained in the “low impact” category. The other three preassessment “low impact” lake sites were moved into a moderate impact category. Of note was Upper Angora Lake, where the molecular biomarker scores moved it from “low” to “moderate”. Even though no contaminants were detected by analytical chemistry, biomarker scores were high. Postassessment discussions with locals provided anectdotal information that explosives may have been dumped into the lake during the mining era. Several lakes originally categorized as “moderate” were moved into the “high” category. Topaz Lake, a reservoir in the Walker River drainage, appeared to be highly impacted, and rated a “very high” impact category. In general, it appeared that most lakes were being impacted more than what we determined by remote information and from what local people would describe.

The main distinguishing feature of these studies was the addition of molecular biomarkers of contaminant and stressor exposure as a diagnostic metric to the assessment protocol. Rainbow trout were used in 48-hour, in situ caged experiments at each lake site and the relative expression of a suite of genes that were up- or down-regulated in response to contaminants and stressors were analyzed. There was a strong relationship between overall biomarker response and levels of human influence at the assessment sites (Figure 1). Biomarkers served to highlight unique situations (such as at Upper Angora Lake) and to help identify potential contaminants that may have been lower than analytical chemistry detection levels or nonbioaccumulative contaminants. They were useful, especially in a monitoring context and were able to detect short-term temporal changes in contaminant loads (e.g., weekend boating activity). Thus, the biomarkers were sensitive indicators of biologically relevant exposures and/or stressors. The main disadvantage of the biomarkers was the additional time and expense added to the assessments compared to standard protocols. However, the use of biomarkers appeared to add significant, relevant information to the assessments making the extra cost and time worthwhile. 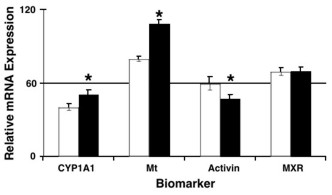 Figure 1. Summary of Overall Biomarker Results in Relation to Human Influences at Lake Assessment Sites. White bars are from low, and black bars are from high levels of human impacts (as rated from assessments). Asterisks indicate significant differences between low and high for each biomarker.