25 publications for this project

The overall objective of this research project is to develop protocols for environmental assessment, of alpine lakes in the Sierra Nevada, which include a range of human impacts. These assessments will be conducted across the spectrum of biological organization (molecular to ecosystem), they will utilize available assessment techniques and add two new ecological indicators. The use of population genetics analysis as a response indicator and the use of molecular biomarkers of exposure to contaminants as a diagnostic indicator are proposed for incorporation into monitoring and assessment programs for surface waters. These indicators will provide critical information about the status of population diversity and stability in regards to the exposure of non-persistent, non-bioaccumulative contaminants. This information is missing from current monitoring and assessment protocols.

In addition to the standard assessment, we will conduct population genetic assessments in fish and invertebrates at these same sites. Allozyme electrophoretic analysis and randomly-amplified polymorphic DNA (RAPD) analyses will be conducted on two organisms common to the lakes of the region (fish: Lahontan redside; invertebrate: Signal crayfish). We also will conduct contaminant exposure assessments in fish using molecular biomarkers of exposure in the gills of fish. Five markers indicative of exposure to a wide variety of chemical contaminants (persistent and non-persistent) can account for interactions among complex mixtures of contaminants that will be measured over time in the assessment areas using caged rainbow trout.

We will apply these additional techniques to current assessment protocols. Because we will examine a group of lakes with defined levels of human impacts, we will be able to analyze the discriminatory ability of the assessment techniques using the current protocols compared to the protocols with the two new indicators added. We hypothesize that because current protocols do not account for genetic diversity or non-persistent contaminants, the addition of these new indicators will enhance monitoring and assessment programs for surface waters.

During the 2001 habitat assessments, physical and chemical water quality measurements, benthic sample collections, sediment core collections, zooplankton collections, fish sampling, contaminants sampling, molecular biomarker assessments, and genetic assessments were conducted at all lakes. At present, all habitat assessment data, four-fifths of the physical and chemical water quality measurements, and fish samples, one-half of the contaminants samples, three-fourths of the biomarker samples, and one-third of the genetic assessments are complete. Analysis of sediment cores for diatom assessments will be done during 2002. Analysis of benthic samples was completed during 2001, but the data are not useful. Because of the low productivity of most of the alpine lakes under study, the standard method of benthos sampling did not produce sufficient organisms to measure assemblages. In 2002, we will resample all lakes for benthos with a more appropriate technique that was developed for low productivity samples such as alpine lakes. These samples will be analyzed in 2002.

All gill and liver samples have been collected for 16 lake sites, including repeat exposures of rainbow trout in the low-impact Marlette Lake and the high-impact Donner Lake. Experimental, in situ exposures consisted of placing 25 hatchery-reared rainbow trout in each lake site for 48 hours. Nearly all of the samples have been fully analyzed for the relative expression of five molecular biomarkers; CYP1A1, metallothionein, vitellogenin, activin, and multiple xenobiotics resistance (MXR). These data have been examined for indications of specific or general exposures to contaminants or to stress. In general, lakes categorized as "high impact" demonstrated higher levels of biomarker response compared to "low impact" lakes. As a stand-alone indicator of lake quality, the biomarkers were useful in that they could discriminate persistent exposures in high- versus low-impact lakes. In addition, the biomarker response indicated the impacted areas where habitat assessment data indicated low-impact sites. This was especially true at Upper Angora Lake, which was pre-classified as a low-impact site, and habitat assessment information places it as such. However, biomarker data indicated that exposure to contaminants and/or general stress occurred in the lake. Subsequent questions of local residents indicated that someone "may have dumped" an unknown quantity of explosives in the lake during the mining era. This information would not have been revealed without the biomarker assessment. In addition, biomarker responses were as sensitive or more sensitive compared to water chemistry analyses for contaminants. For example, at Donner Lake, polycyclic aromatic hydrocarbons (PAHs) were at or near detection limits, but we observed a very strong induction of CYP1A1 at Donner Lake, indicating exposure to planar aromatic hydrocarbons.

During the summer of 2001, populations of four species were sampled from each lake. Successful collections for both 2000 and 2001 are indicated for each lake and species in Table 1. Unsuccessful collections may have resulted either because the species was not present or because the collection attempts were unsuccessful. For fish and crayfish, at least 30 individuals were collected from more than two stations on each lake where possible. All samples are being held in -80°C freezers at Miami University.

Preliminary analyses of the combined data have been initiated. The first approach was a multivariate data reduction step. We have more than 1,100 measurements for each lake. After a quick look at the data, we used principal components analysis (PCA) to examine the data. A common examination of multivariate data is to plot the first two principle component eigen vector values to look for clusters or patterns in the data. In our case, this is useful because we pre-classified lakes according to their expected impact level. Therefore, we expect to see clustering of lakes based on impact level. Separate PCAs were conducted using data from the habitat assessments, the limnological (chemical physical) assessments, and the biomarker assessments, both individually and combined. Plots of the first two prinicpal component vectors are presented in Figure 2. It is apparent from the figure that the traditional assessment techniques explain a large proportion of the variation of the lakes, and that they do a very good job of clustering the lakes by impact level. Biomarker data do not add a tremendous amount of information to the overall assessment of lake category, but are extremely useful in identifying persistent, high-impact exposures and outlier exposures (e.g., Angora Lake). We will continue to analyze data and add to the assessment information.


Table 1: Successful Species Collections for each Lake/Reservoir in 2000 and 2001 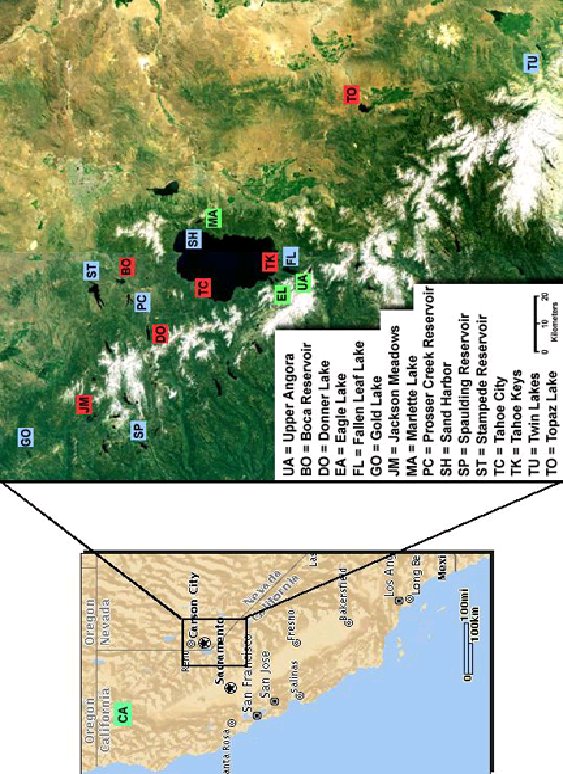 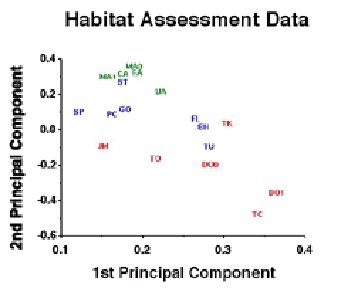 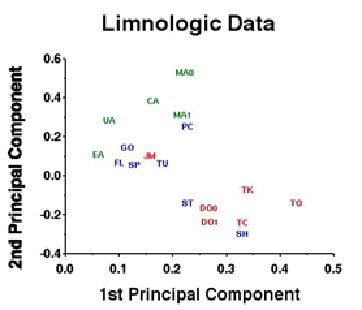 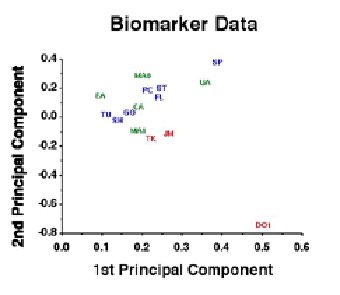 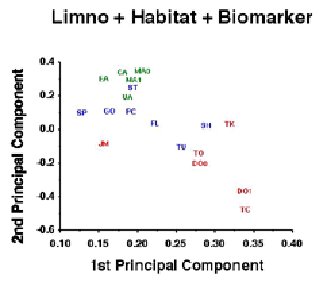 For the 2002 season, we will conduct more assessments at Marlette and Donner Lakes (our repeat lakes for each year). We also will conduct an additional assessment of Marlette Lake in August of 2002 (first three assessments will have been conducted at the beginning of the season, in late June). We plan to conduct additional assessments at Boca Reservoir (one of our original high impact water bodies) in 2002, as well as Lower Twin Lake, and an additional high impact lake yet to be determined. We plan to compare Lower Twin Lake to Upper Twin Lake. The two lakes are of the same basin type and shape, but Upper Twin has a large resort area, a marina, no engine or speed limits, and is regularly stocked with rainbow trout for sportfishers. Lower Twin Lake has only two small boat ramps, a 5 mph speed limit, a 10 hp engine limit, and is not stocked with fish. The final lake (to be determined) will replace Spaulding Reservoir, because drought conditions were at an extremely low level during our 2000 assessments.