The objective of this research project is to determine whether particulate matter (PM) deposited in the lungs causes the release of inflammatory cytokines from the lungs that target the cardiovascular system. Transgenic mouse strains with specific cardiovascular genetic alterations are used to address the research needed to identify potential health conditions that enhance susceptibility to adverse PM health effects. The nature of such health conditions provides insight into the biological mechanisms by which PM mediates acute and chronic health effects.

During the past year, an extensive statistical analysis was completed of three studies conducted by this project. This involved the development of a new statistical approach by Thomas Lumley. The basis of this analysis is as follows. A standard ANOVA analysis of the collected cardiovascular telemetry data obtains all its statistical information about variability from comparisons between mice; however, it is inefficient when there is mouse-to-mouse variability in the response. By analyzing the time series of measurements for each mouse, it is possible to compute a mouse-specific estimate of uncertainty and so to make mouse-specific inferences about the effects of PM exposure and oro-pharyngeal aspiration. These inferences can be combined across mice using a random-effects meta-analysis. This two-stage analysis strategy is similar to that used in the National Morbidity, Mortality, and Air Pollution Study epidemiological studies of PM, where city-specific time series models were fitted and then combined across cities, although the details of the analyses differ. 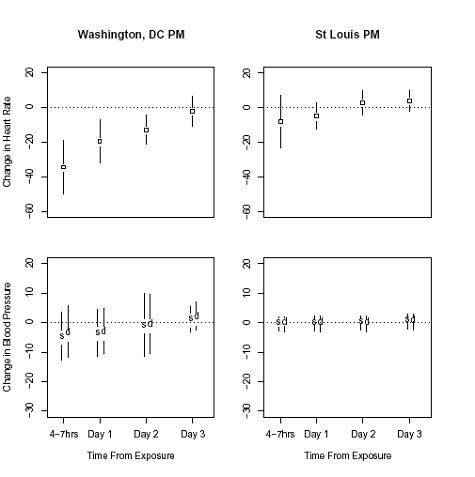 Telemetric monitoring of cardiovascular function was conducted in freely moving, nontethered mice. The monitoring was conducted via an implanted radio transmitter. A catheter attached to the transmitter was inserted into the left carotid artery, while a transmitter was positioned between the skin and body wall. After surgery, the animals were allowed to recover for 1 week to 10 days. A 1-day baseline recording was followed by a vehicle exposure (pyrogen-free saline, 50 µL/mouse) and 3-day recording. After recovery for 1-2 weeks, a second baseline was recorded, and mice then were exposed to a dose of 125 µg PM/50 µL saline/mouse followed by a second 3-day recording of cardiovascular parameters. Three studies were analyzed, including one with a cross-over design to randomize vehicle versus dust exposure. In summary, the following was found: (1) there was a statistically significant reduction in heart rate with the Washington, DC dust, but not with the St. Louis dust; this reduction was found at lag times of 4 to 7 hours, 1 day, and 2 days; (2) no statistically significant changes in blood pressure were found at any time period; and (3) the cross-over design allowed an estimate of the effects of the background experience, and: these effects were not statistically significant. There was no statistical difference between the genotypes in their response to PM. We believe this was probably due to the fact that relatively young animals (mice aged 3-4 months) were studied. Recently, histological analyses by Michael Rosenfeld show that significant atherosclerotic lesions do not develop in the ApoE-/- model until 10-12 months of age. Older animals are being used in ongoing studies.

Another radio telemetry study measuring electrocardiogram (ECG) and heart rate also was conducted this past year. Again, individual mice were exposed to 125 µg of SRM #1648 (St. Louis urban dust) in 50 µL saline by oro-pharyngeal aspiration. Recordings were collected using the protocol described above. Time-domain measures were calculated from the ECGs; that is, the standard deviation (SD) of all normal R-R intervals (SDNN) and the square root of mean of squared differences between adjacent normal R-R intervals (MSSD). Both measures showed an increase during the 3 days following the saline exposure, and the 3 days following the dust exposure (SDNN result shown in graph). Similar results were shown in a cross-over design exposure. Notable differences were not found in the responses of normal C57/BL6 versus ApoE-/- animals. 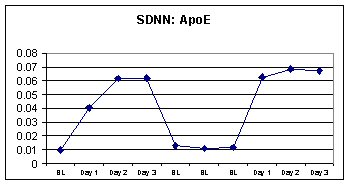 The future activities of this research project will be to:

(1) Study the toxicity of Seattle, WA PM collected on filters and comparison with effects of east coast PM obtained from Bob Devlin at EPA.

(2) Study the effect of age combined with an additional risk factor, Chlamydia infection, in animals exposed to PM.

(5) Conduct genetic analyses using microarrays before and after exposure to Seattle, WA PM.

In addition, a pilot grant application with Terry Kavanagh was submitted that, if funded, would allow us to study the effects of PM in an oxidant transgenic mouse model. The rationale for the proposed study is that glutathione (GSH) is a major antioxidant in the lung, and inhibition of its synthesis has been shown to exacerbate lung injury by a large number of toxicants. We propose to test the hypothesis that mice having a genetic deficiency in GSH synthesis will show increased susceptibility to PM. These data will provide insight regarding the role of GSH and Glutamate-cysteine ligase (GCL) in defense against PM-induced cardiopulmonary injury.

No journal articles submitted with this report: View all 8 publications for this subproject