EPA announced the availability of the final report, A Field-Based Aquatic Life Benchmark for Conductivity in Central Appalachian Streams. This report describes a method to characterize the relationship between the extirpation (the effective extinction) of invertebrate genera and salinity (measured as conductivity) and from that relationship derives a freshwater aquatic life benchmark. This benchmark of 300 µS/cm may be applied to waters in Appalachian streams that are dominated by calcium and magnesium salts of sulfate and bicarbonate at circum-neutral to mildly alkaline pH.

This report adapts the standard U.S. EPA methodology for deriving ambient water quality criteria to develop a protective benchmark for a mixture of salts in freshwater.  Rather than use toxicity test results, the adaptation uses field data to determine the exposure level at which 5% of macroinvertebrate genera are extirpated from streams. The method is applied to derive a benchmark for dissolved salts (measured by conductivity) of 300 µS/cm. The benchmark was derived for Central Appalachian streams using data from West Virginia and was validated using data from Kentucky. Field data were used because sufficient and appropriate laboratory data were not available, and because high quality field data were available to relate conductivity to effects on biotic communities. This report provides scientific evidence for the conductivity benchmark in Appalachia rather than for the entire United States.  The mixture of salts is dominated by calcium and magnesium salts of sulfate and bicarbonate at circum neutral to mildly alkaline pH. The report demonstrates that elevated salinity causes the loss of macroinvertebrates and that the relationship between conductivity and macroinvertebrates apparently is not appreciably influenced by other potential causes.  Extirpation values for individual genera are provided in an appendix.

This report provides scientific evidence for a conductivity benchmark in a specific region rather than for the entire United States. 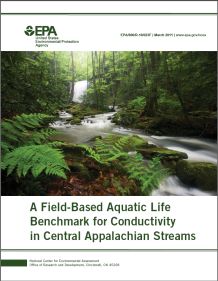