EPA released the final report, EPA's 2008 Report on the Environment (EPA 2008 ROE), a science-based report that answers questions about recent trends in human health and the environment. This report aids the American people with an important resource from which they can better understand trends in the condition of the air, water, land, and human health of the United States.

This report uses scientifically sound measures, called indicators, to address fundamental questions relevant to the EPA's mission to protect the environment and human health. To accomplish its mission to protect human health and the environment, EPA must pay close attention to trends in the condition of the Nation's environment. This kind of information, which is captured in EPA's 2008 ROE, can help EPA to prioritize its work and to focus on human health and ecological activities that can lead to improvements in the conditions of the Nation's environment.

The EPA 2008 ROE is an update of the draft ROE that was released in 2003 and it builds on the foundation of that draft report. EPA’s first experience with the 2003 ROE resulted in a better understanding of which indicators are robust enough to include in the EPA 2008 ROE. EPA was committed to identifying the best available set of scientifically sound indicators for the EPA 2008 ROE in an open and transparent manner. Because of this commitment, the Agency took the extraordinary step of having all of the proposed indicators independently externally peer reviewed in a public forum to determine if each proposed indicator was supported by data that were technically sound, met the established indicator definition and criteria, and helped answer the questions posed in the EPA 2008 ROE. After that step, an external review draft of the full EPA ROE was subjected to an independent external peer review, as well as public review and comment. This level of thorough and rigorous for external review serves to reinforce EPA’s commitment to obtaining independent expert input on this document and to an open and participatory public process for the development of this report.

The EPA 2008 ROE offers a unique opportunity to EPA to frame a discussion about the Agency’s strategic planning from the perspective of ultimate environmental outcomes, using the best available, most scientifically sound measurement approaches. The EPA 2008 ROE could also lead to new indicators, new monitoring strategies and new programs and policies in areas EPA determines to be highly important based on measured environmental trends.

EPA also produced a Highlights of Conditions and Trends document, which summarizes the findings of the EPA 2008 ROE in an easier to understand format.

EPA is committed to releasing periodic updates of the ROE so that information on environmental conditions and trends can be provided to interested members of the American public.

The purpose of EPA’s ROE 2007 is to compile the most reliable indicators currently available that help answer a series of questions about trends in the environment and human health that EPA believes are of critical importance to its mission and to the national interest. 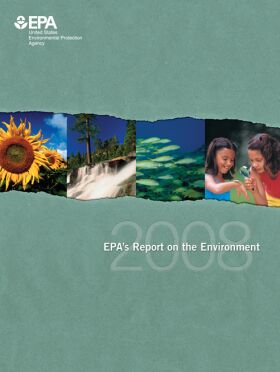