Updates To The Demographic And Spatial Allocation Models To Produce Integrated Climate And Land Use Scenarios (Iclus) (Final Report, Version 2)

EPA's announced the availability of the final report, Updates to the Demographic and Spatial Allocation Models to Produce Integrated Climate and Land Use Scenarios (ICLUS) (Version 2). This update furthered land change modeling by providing nationwide housing development scenarios up to 2100. This newest version includes updated population and land use data sets and addresses limitations identified in ICLUS v1 in both the migration and spatial allocation models. The companion user guide (Final Report) describes the development of ICLUS v2 and the updates that were made to the original data sets and the demographic and spatial allocation models.

Improvements include the use of updated population and land use/cover data sets, integration of changing climate variables within the migration model, inclusion of transportation network capacity and its increase over time, growth in commercial and industrial land uses, and the use of population density-driven demands for growth of residential housing, commercial development, and industry.

In addition, the companion report demonstrates the effect of these improvements by comparing national and regional results among the SSP and RCP combinations used and the two climate models selected. ICLUS v2 shows differences in population migration patterns by including climate variables that change over time rather than ones that are static. Additionally, changing commercial and industrial land uses can drive patterns of new urban growth that have consequences for many environmental endpoints.

The GIS tool enables users to run SERGoM with the population projections developed for the ICLUS project and allows users to modify the spatial allocation housing density across the landscape. 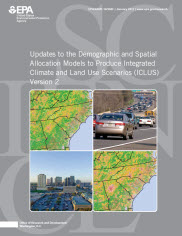