EPA announced the availability of the final report, Land-Use Scenarios: National-Scale Housing-Density Scenarios Consistent with Climate Change Storylines. This report describes the scenarios and models used to generate national-scale housing density scenarios for the conterminous US to the year 2100 as part of the Integrated Climate and Land Use Scenarios (ICLUS) project. The report was prepared by the Global Change Research Program (GCRP) in the National Center for Environmental Assessment (NCEA) of the Office of Research and Development (ORD) at the U.S. Environmental Protection Agency (EPA).

Climate change interacts with existing and future land uses, such as residential housing and roads. Up to now, there have been no scenarios of land-use changes for the U.S. that are consistent with the storylines of population growth, greenhouse-gas emissions, and socio-economic changes used by climate-change modelers. The lack of these consistent scenarios has impeded progress of integrated assessments of climate and land-use change on endpoints of concern, such as water quality, aquatic ecosystems, air quality, and human health. The ICLUS project created an initial set of housing density scenarios.

This final report describes the methods used to develop land-use scenarios by decade from the year 2000 to 2100 that are consistent with these storylines. A demographic model feeds population projections into another model that distributes new housing across the landscape. The scenarios cover the 48 contiguous U.S. states. The final report also describes the conversion of housing density to impervious surface cover and provides an initial analysis of changes in watersheds across the United States. Other analyses include regional trends in population growth and in housing density. This final report provides technical modeling details and describes potential next steps to integrate climate change variables into the model.

The ICLUS report describes the methods used to develop land-use scenarios by decade from the year 2000 to 2100 that are consistent with these storylines. 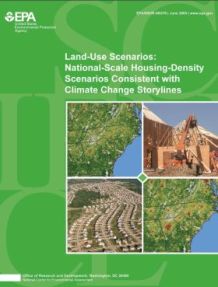