EPA announced the availability of the final report, Stressor Identification in An Agricultural Watershed: Little Floyd River, Iowa. This assessment demonstrates that, even when there are many candidate causes and uncertainties are substantial, the probable causes of biological impairments can be determined with enough certainty to inform decision making to address environmental problems.

The U.S. Environmental Protection Agency (U.S. EPA)’s Stressor Identification (SI) procedures were used to identify a screening causal assessment of a biologically impaired stream in the state of Iowa.  The Little Floyd River was included on the 1998 303(d) list of impaired waterbodies based on a 1990 stream-use assessment.  At that time, no fish were observed and only pollution‑tolerant benthic macroinvertebrate species were present.  Fish have since recolonized the stream.

The Iowa Department of Natural Resources (IDNR) characterized the impairment of the stream using chemical and biological samples, as well as observations of the physical habitat collected at four sites over the course of four years.  The evidence was reanalyzed by comparing data among the four sites using a less impaired comparator site within the Little Floyd to determine the co-occurrence of stressors with benthic macroinvertebrates and fish.  Other types of evidence used in the case were complete causal pathway, stressor response from other field studies, and stressor-response studies from laboratory data and other studies.  IDNR identified the primary probable causes of biological impairment as deposited sediment and low dissolved oxygen.  Based on the original SI completed by the IDNR, total maximum daily load (TMDL) for sediment and dissolved oxygen were submitted to and approved by the U.S. Environmental Protection Agency in 2005. 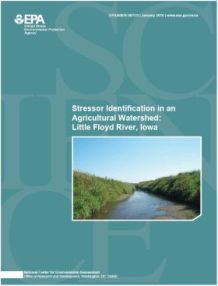